Real Madrid could all but seal the La Liga title on Monday at the Nuevo Los Carmenes stadium. 'Los Blancos' announced their squad list this Sunday for Monday's game at Granada.

Zidane have got back two important players in defence. Both Dani Carvajal and Sergio Ramos will return to the starting XI versus Granada.

Who will not be in the team after playing against Alaves is Mariano Diaz. The striker was not in the training session this Sunday and so he did not make the squad.

Therefore, Karim Benzema is the only proper striker in the squad because Mariano and Jovic will not be available versus Granada. Jovic has tested negative twice for COVID-19, but is still isolated from the rest of the squad. 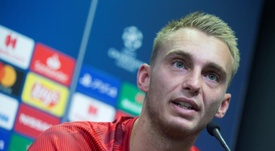