Goals from Robert Lewandowski and Benjamin Pavard gave Bayern Munich a 0-2 win over Union Berlin at the Stadion an der alten Forsterei on the first weekend back in the Bundesliga after the coronavirus break.

Bayern Munich travelled to East Berlin on Sunday on matchday 26 of the Bundesliga and despite getting the job done, it was far from a masterclass by Hansi Flick's men. Robert Lewandowski converted a penalty just before half-time and then Benjamin Pavard's header from a corner 10 minutes from time were the difference between the two sides.

Union Berlin were actually the better team in the first 15 minutes of the behind closed doors fixture. Bulter was denied by Neuer from close range after just four minutes before Ujah fired narrowly wide after Hubner's long pass. However, Bayern soon found their feet and their class ended up showing.

The Bavarians thought they had scored after 18 minutes with Goretzka headed Kimmich's corner and then Gnabry flicked the ball on to Thomas Muller who tapped in from less than six yards. However, the VAR detected that Muller was in an offside position and Union Berlin were still level. That set the tone for the rest of the game though.

Davies caused problems down Union's right for most of the contest and Lewandowski was somehow unable to turn one of Davies' crosses in four minutes later after keeper Gikiewicz had got a hand to the ball. Bayern then began to take control of the game and six minutes before half-time they were given a golden opportunity.

Subotic needlessly kicked Goretzka's leg after Lewandowski's cross into the area and referee Bastian Dankert had no hesitation in pointing to the spot. It was so clear that Subotic did not even contest the decision. Lewandowski found the net in his first game back. He stuttered in his run up and then sent the ball to the keeper's left. It was not in the corner and the goalie nearly stopped it.

Things nearly got worse for the home side right on the interval as Muller passed to Pavard and the Frenchman's curling effort hit the sidenetting. The 15 minute recess came at the ideal time for the team from the capital, but little changed after they returned from the dressing room.

In fact, Bayern could have doubled their lead several times before they actually did. Goretzka, Lewandowski and Pavard all had opportunities before the hour mark. For the men who were without their coach Urs Fischer, they had just a Promel effort wide in the early exchanges of the second period.

The defending champions had more than two-thirds of the possession and Coman so nearly scored in the 76th minute after a rapid counter featuring him and Gnabry, but Coman's shot across goal could not be turned in by a teammate. Then Gnabry combined with Davies and the former was denied by a fine stop from Gikiewicz in the Union goal. The match was put to bed shortly afterwards though.

Bayern won a corner in the 80th mnute and Joshua Kimmich's set piece was headed home by Benjamin Pavard. The goalie had no chance, but had a defender been covering the near post, it would have been a simple stop for him on the line.

The tempo of the encounter dropped significantly after that as the changes were rung in the final exchanges. The only noteworthy thing to mention was Felix Kroos, brother of Real Madrid's Toni, was denied a late consolation after a fine stop by Neuer.

Bayern fully deserved the three points and go back four points clear ahead of their game with Frankfurt on Saturday while Union are in 12th, seven points above the relegation play-off spot. They travel to city rivals Hertha on Friday night. 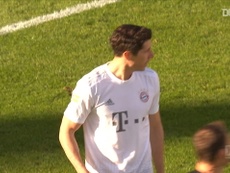 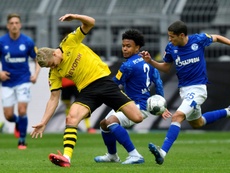 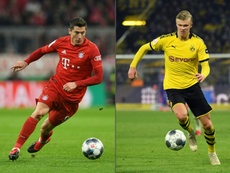 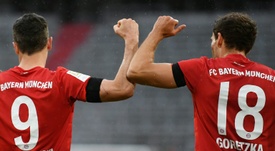