Ajax v Liverpool - as it happened

Join us for live coverage of the Champions League clash between Ajax and Liverpool at the Johan Cruyff Arena. This is the visitors' first match since losing Virgil van Dijk to injury.

Post.
That's all from us. Thanks for joining us and see you again soon!
96'

FT: Ajax 0-1 Liverpool!! All over in Amsterdam and a Tagliafico own goal was the difference between the two sides. It was fairly even, but Ajax lacked the cutting edge to break down. After having an effort cleared off the line and then striking the post in the 46th minute, they hardly had a clear cut chances. Just a Promes effort which was saved and then a Ekkelenkamp one right at the end. Without dominating, Liverpool were reasonably comfortable in the second half, in all honesty.
95'

What an opportunity!!! A long ball is launched in, Adrian doesn't clear and Ekkelenkamp hits it over the bar!!! Should have hit the target.
93'

Promes sees yellow for a foul on Wijnaldum.
92'

That was nasty!! Milner is caught in the head by Traore's shoulder and they jump for the ball. Milner seems ok though.
87'
Huntelaar finds Traore and the header is weak and straight at the keeper.
85'
Wijnaldum has a pop at goal, the ball strikes his own man Jota and it's a goal kick.
84'
Ajax launch one into the area, Liverpool deal with it, the counter is dangerous and it Robertson's cross is knocked away.
83'

Ajax double sub: Schuurs and Blind are off, Traore and Huntelaar are on.
82'

TAA sees yellow for wasting time.
80'
Tagliafico goes up field, he crosses and Liverpool boot it away!
78'
Ajax get caught out at the back and it's nearly 0-2!! They just can't quite turn the ball in.
77'
What's going on here!! Onana come charging 40 yards out of his goal, his clearance is blocked by Jota and Schuurs has to run back to clear the danger.
75'
Ajax throwing more men forward now and Liverpool manage to clear their lines.
74'

Ajax double sub: Neres and Klaassen off, Ekkelenkamp and Labyad on.
73'

Wijnaldum!!! The corner comes in and the Dutchman heads onto the top of the net.
73'

Ajax are lacking the cutting edge needed to find a leveller and Liverpool are reasonably comfortable, Jota now gets a corner for the English side.
72'
Absolutely hammering it down in Amsterdam!
70'

Good effort by Minamino and Onana has to bat to his right for a corner.
67'

Henderson was just getting some treatment a minute back.
66'
Tadic looks to win a corner after being played in by Klaassen and he can't win the corner. The ball strikes TAA's arm and it's not a pen. Had it hit his right arm, it would have been a pen.
64'

Tadic is penalised for a foul on Milner.
63'
Liverpool attack through Jota on this near side, he looks for Minamino in the middle and Tagliafico knocks it out for a throw.
61'
Mane is having some ice put on his right leg... I wonder whether he has picked up a knock. Salah is just sitting there with his tracksuit on.
59'

Ajax!!! Lovely counter by the Dutch involving Tadic, Mazraoui and Klassen and Promes' shot is well saved by Adrian for a corner.
58'

Another corner for Klopp's men and the German is set to make a triple switch.
57'

Corner for the visitors, Fabinho's headeris deflected by Tagliafico for a corner.
56'
Ajax are trying to go forward, Liverpool have been comfortable since the post shot.
54'
No major chances in the last few minutes and Liverpool will be happy.
51'
Liverpool attack through Robertson, but Ajax cut out his pass.
51'
Ajax launch a ball into the box and Adrian comes out to catch!
48'
Calls for a penalty by the away side after Firmino goes down, but Brych says no. Schuurs did have a little pull, but not enough for a pen.
46'

HT: Ajax 0-1 Liverpool!!! Half-time in Amsterdam! The Reds through a Tagliafico own goal after a wayward shot by Mane. The game was cagey early on and very even. Gravenberch had the best chance for Ajax while Liverpool were playing on the counter, but since the goal, it's been very lively. Tadic very nearly levelled with a chip only to see Fabinho clear off the line. A draw would be fair at the break. Back for more in a bit!
45'
Lovely play between Neres and Tadic and TAA has to make a vital header away, the attack continues through Blind and he's finally dispossessed!
45'
Two added minutes.
45'

Then Mane goes up the other end and Schuurs very nearly turns it into his own goal!! From the set piece, there's another header towards goal.
44'

Off the line by Liverpool!!!! A long ball forward is sent to Tadic, the Serbian chips it over the goalie and Fabinho clears it off the line!!!
42'
A ball in from Promes is knocked away by Adrian and Liverpool counter at breakneck speed again. Unfortunately for them, the pass through to Salah is slightly overhit.
41'
Liverpool are definitely on top now. They are quick on the break and they have more of a cutting edge going forward.
40'

Ajax go forward, the Reds clear and they counter brilliantly!! Robertson makes a lovely run, he passes to Salah and the Egyptian's shot is blocked by the Dutch defence.
37'

Milner goes into the book for a foul on Neres.
35'

Liverpool ahead! Tagliafico scores in his own net!!! A throw in goes to Mane, he controls and runs into the box, the Senegalese's shot is woeful (it was going for a throw-in), but Taglafico diverts it into his own net!

Ajax combine, Neres should have shot, but he passes to an offside Promes and the shot is well saved! Wouldn't have counted anyway. Not sure it was offside actually!
32'
Great defence by Blind!!! A long ball is sent forward to Salah, Schuurs can't control, Salah backheels for Firmino and Blind gets to the ball first!
31'

Free-kick for Ajax just outside the box, but nothing comes of it.
30'
Jones finds Robertson to his left and the Scot's cross is caught by Onana.
29'
Gravenberch's cross is punched by Adrian and Liverpool counter!
27'

Jones is caught offside in the Ajax box. Liverpool growing into this one. 64% possession for the Premier League side.
26'
Liverpool passing the ball near the Ajax area waiting for the opening, but it doesn't arrive.
24'
Liverpool having a little bit of ball, but the game is very similar to the Chelsea one yesterday. Fairly even, 0-0 and chances at a premium. Good chance it will be goalless at the break.
21'

Gravenberch!!!! Promes goes down this near side, the pass is tapped back by Tadic to Gravenberch who fires wide from inside the D! Klopp is fuming.
20'
Jones' deflected effort is simple for Onana.
19'
Tadic finds Tagliafico, he manages to keep the ball in play, Promes' effort is cleared off the line and the counter comes to nothing despite a nice move.
17'
Little to choose between the two sides so far. I'd say Ajax are edging it maybe.
16'
The set piece is taken short and then Tadic crosses for Martinez who heads at the goalie.
16'

Corner for the hosts here.
15'
What was Adrian doing? His clearance is charged down by an Ajax man and he's fortunate the charge down by Tadic takes the ball away from goal.
13'

Curtis Jones is caught offside.
11'
Ajax go forward with Promes, Tadic and Neres and Fabinho breaks down the move!!! On the counter, Mane has a shot, it's blocked and Tagliafico clears! Exciting.
10'
Tadic has the ball on the far side and Gomez blocks his cross.
9'

Ajax sub: Kudus is replaced with an ankle injury and Promes is on.
9'
Ajax go forward through Neres, he goes down wanting a free-kick and nothing is given.
7'
The Ghanaian has got up and has gone limping to the touchline.
6'

Problem here for Kudus! He seems to have hurt his right ankle while going for the ball.
4'

Free-kick for Ajax here in their own half.
3'
Both teams showing attacking intent here early on.
1'
Early possession from the Reds, a pass is aimed at Salah and the Dutch side clear it.
1'

Liverpool get us going from left to right in the black as fireworks go off outside stadium!!! Ajax in their usual kits.
Prev.
The players are out here!!
Prev.
Ajax beat Heerenveen 5-1 last Sunday in their last match and they make just one change. Lisandro Martinez starts in defence and Traore drops out.
Prev.
What a moment it is for 19 year-old midfielder Curtis Jones. The Welshman has mainly featured in the Carabao Cup and has played the odd PL game, but he is making his CL debut here tonight and he's even starting!
Prev.
Liverpool make some changes from the 2-2 draw with Everton. Van Dijk is replaced by Gomez while Matip, Thiago and Henderson also drop out. Wijnaldum, Curtis Jones and Milner all start.
Prev.
Remember this is Liverpool's first game since losing Virgil van Dijk to an ACL injury at the weekend in the 2-2 draw with Everton.
Prev.
Atalanta and Danish side Midtjylland are the other two sides in this group, group D.
Prev.
17 degrees and cloudy in Amsterdam this evening.
Prev.
Felix Brych of Germany is the referee for this one while his compatriot Christian Dingert is the VAR.
Prev.

Prev.
Hello and welcome to our live coverage of the Champions League clash between Ajax and Liverpool. 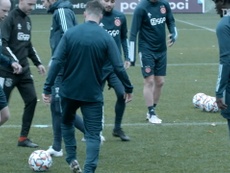 VIDEO: Behind the scenes: Ajax edged out by Liverpool in Champions League 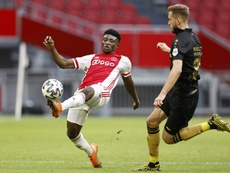 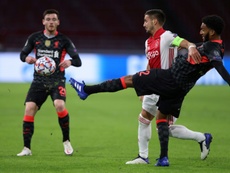 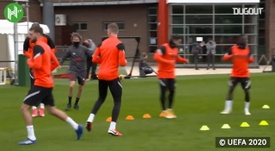