Zaniolo suffers injury in Roma-Juve in front of Mancini

Italy coach Roberto Mancini wore an anxious look as an injured Nicolo Zaniolo was taken off on a cart in Roma's Serie A clash with Juventus.

Nicolo Zaniolo was taken off on a cart after suffering a serious-looking injury in front of Italy coach Roberto Mancini during Roma's Serie A clash with Juventus on Sunday.

The 20-year-old had his head in his hands as he was withdrawn 36 minutes in after injuring his left leg when Juve defender Matthijs de Ligt halted his progress with a foul on the edge of the penalty area.

Zaniolo had beaten four Juve players during a brilliant run which started near his own penalty area, but De Ligt - himself on for the injured Merih Demiral - stepped out and brought him down with a body check that earned the centre-back a caution.

The Roma midfielder writhed in pain on the edge of the box and needed a cart to be helped off the field, with Mancini, watching on from the stands, wearing a concerned expression.

Zaniolo has scored twice for Italy in his five appearances and had been expected to be a key figure for Mancini during Euro 2020.

Roma were 2-0 down to Juve at the time of Zaniolo's injury having conceded twice in the opening 10 minutes. 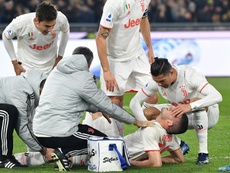 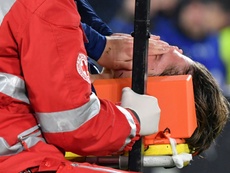 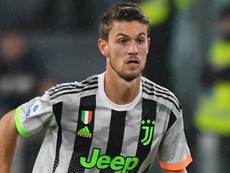 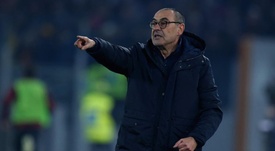