Newcastle boss Howe admits he must shut out the 'noise'

BeSoccer 12 days ago 223
Eddie Howe admits there is a lot of pressure on him at Newcastle. AFP
Eddie Howe said on Friday he must shut out the "noise" as he prepares to take charge of his first match as Newcastle manager, weeks after the Saudi-led takeover of the club.

The former Bournemouth boss is seeking to end his struggling club's wait for a first Premier League win of the season against Brentford on Saturday.

Howe was hired earlier this month as Newcastle's wealthy new owners seek to transform their club after years in the wilderness and he is under huge pressure to deliver. But the 43-year-old said he would not lose sleep.

"I have to separate myself from the noise because the noise isn't going to help me in the job and my dealings with the players, so I think that's going to be one of the most important factors for me," Howe said. "I have always prided myself with my work with the players, my interactions with them, the way that I have tried to improve them. That can't change despite the bits of my job now, the demands on my time that are going to be huge. But I have to prioritise, so I think that's going to be a key thing for me."

Howe admitted the Newcastle role was a big challenge -- the club has not won major silverware since 1969. "You can sense that it's a huge job," he said. "There's a real yearning from the supporters to be successful, to produce a team that they enjoy watching -- that's the big challenge ahead for us."

Howe, who has been out of work since he left Bournemouth in August 2020, said the start of his tenure, during an international break, had been a whirlwind. "I can say with all honesty I have seen the training ground and I have seen my hotel," he said. "I haven't seen Newcastle in the light yet -- tomorrow will actually be the first day that I step into Newcastle when it's daylight."

The club have collected just five of the first 33 points on offer in the Premier League this season and are five points from safety but it is a challenge that does not faze Howe. "At Bournemouth, every year we were in a relegation battle," he said. "For the first four years, we achieved our objective and stayed in the Premier League. So I've been in the position many, many times. It's not nice, it's not enjoyable to be fighting relegation." 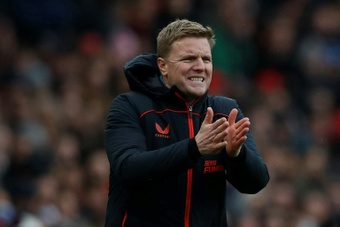 Newcastle have eye on Serie A