The final day of the season saw Manchester City travel to the South Coast with the opportuntity of hitting an unprecedented Premier League century. Just when they thought they'd have to settle for 98 points, Gabriel Jesus popped up.

The first chance of the game fell to the hosts when centre-back Wesley Hoedt rose highest to meet a corner. Unfortunately for the Dutchman, he was denied the opener by the woodwork as the ball came crashing down off the crossbar.

A tame first period saw both sides forced to try their luck from distance. Raheem Sterling lashed a rising effort towards Alex McCarthy before Oriol Romeu rifled wide of the target minutes before the break. ‘0-0’ read the big screens after a lacklustre first-half.

Pep flicked a switch at half-time and sent an electric City side back onto the turf.

On the 60 minute mark, Sterling charged at the Saints defence, skipped past his marker in the box and fired at goal. And the net would have bulged had it not been for a last-ditch Charlie Austin deflection that caused the ball to sting the upright.

Twenty minutes of end-to-end pressure followed before Dusan Tadic created the chance of the game. Played in by a dinked pass to the back post, the Serbian was instantly met by Claudio Bravo who had come galloping out from between the sticks. Tadic rounded the City goalkeeper, cut back to skin him again and then fired goalwards. Fortunately for the visitors, Fernandinho was on hand to hack the ball off the goal line and away to safety.

Saints were headed for a deserved point until City orchestrated the grand finale. In the third minute of added time, Kevin De Bruyne lumped a hopeful ball forward and it paid off, falling at the feet of Gabriel Jesus. The Brazilian kept his cool and executed an exquisite lob to snatch the win and get the away stand bouncing.

Having avoided the nightmare 10-goal swing, Southampton were declared safe at the final whistle. Nevertheless, it was heartbreak at the death for the Saints as City rounded off a record-breaking season with an historic, never-before-seen, 100-point tally. 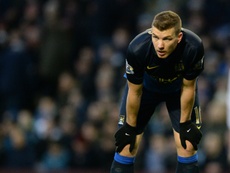 'Dzeko's failure to accept no 2 role cost him City status' 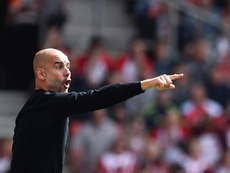 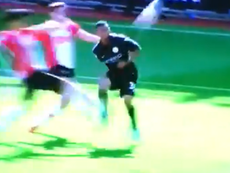 The goal that launched City to 100-point mark 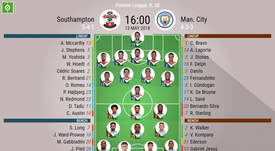