After the sides could not be separated during 90 minutes of cat and mouse action at the King Power Stadium, it fell to spot kicks to decide which team would take their place in the semi-finals.

The first half of this encounter was played in the same fashion as the majority of Manchester City matches. In spite of having fielded a young side, the Carabao Cup holders resumed control of possession and play early on and were rarely troubled.

In fact, the only trouble that Leicester could muster in the opening stages, was the ability to counter-attack the visitors, by utilising the pace of Demarai Gray to get in behind their advanced back line.

Nevertheless, the pacey Kyle Walker mostly managed this threat, and young City stopper Aro Muric was also quick off his line to collect any dangerous breakaways.

City would take an early lead in the match. Before the clock struck the fifteen minute mark, the returning Kevin De Bruyne produced a piece of personal magic to assert his influence on the match.

From the edge of the area, the Belgian gave 'Foxes' keeper Ward the eyes, before whipping a shot towards the near post. The ball flew into the back of the net via the base of the post.

Throughout the remainder of the first period, the Premier League champions were in total control.

Youngsters Phil Foden and Brahim Diaz gave great accounts of themselves; those two, along with the city keeper, left back and one half of the central defensive pairing, were five youth players that had been entrusted to start the match for Pep Guardiola's side.

After a valiant response to falling behind, where they attempted to load the City penalty area, Leicester were still no closer to tying the scores as the interval loomed. Kelechi Iheanacho had a great chance to take aim at goal, but he skewed his shot wide of the target.

After the interval, the home crown began to voice their frustrations. Their side had yet to really test City, who looked vulnerable at times against the pacey Leicester front three.

Soon enough, manager Claude Puel began to ring in the changes; the 'foxes' boss introduced more pace and directness to his side throughout the second half, which would eventually pay dividends.

One substitute, Marc Albrighton, would make the all important difference for the hosts. The Englishman took the initiative to run in behind the high City back line, and after having been picked out by an excellent lofted pass from Ndidi, the forward slammed home on the volley to drag his side into the score line.

The equaliser prompted changes from visiting boss Pep Gaurdiola, who had seen his side concede from barely any sustained pressure. Raheem Sterling and Gabriel Jesus were therefore thrown into the fray.

Unfortunately for the City manager, his changes would not be as effective as his counterparts. Brazilian Jesus did have a strong claim for a penalty waved away, when he was tackled from behind  by Leicester defender Choudhury. Although the referee was in a good position to see the challenge, and waved play on.

The last ten minutes of the encounter were frantic, as both sides could sense that a goal would both nick the spoils and help them to avoid a repeat of last year's decisive penalty shootout.

Alas, it was not to be. Both sides had chances to flood the box late on, but a collection of last ditch blocks and poor final passes, condemned the tie to a shoot out.

Given that Leicester had come through the last two rounds of the competition on spot kicks, they would have been feeling confident of winning this battle of wits against their guests.

However despite extensive prior practice of the kick taking formalities, the 'Foxes' seemed to crumble under the pressure, producing a series of poor attempts.

Meanwhile, City would also miss their second penalty, via a miss-judged panenka style shot from Raheem Sterling. However a couple of saves from young stopper Aro Muric, paired with two confident strikes from Gabriel Jesus, and even more so from Oleksandr Zinchenko, ensured that the holders would be in the hat for the semi-final draw.

Overall, on the balance of play, City did deserve to go through to the next round. However one has to feel sorry for Leicester; as after dragging themselves back into the contest, a trio of poor penalties knocked them out of the competition.

And so, for the second year in succession, Manchester City knock Leicester City out of the Carabao Cup quarter-finals on penalties at the King Power stadium. 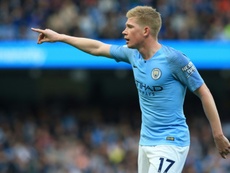 De Bruyne delighted get back on the pitch 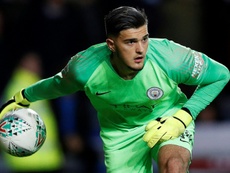 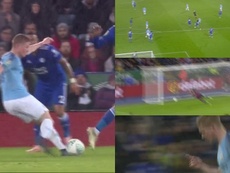 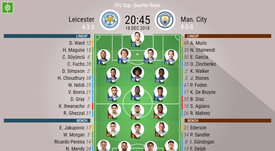