Rafael Benitez is battling to break one of the worst spells of his 34-year coaching career as he takes on Giovanni van Bronckhorst's Guangzhou R&F on Saturday in China with both desperate for victory.

Two of the biggest names in the Chinese Super League need a first win this season to prevent a poor start sliding towards crisis.

Under Benitez, reportedly one of the world's best-paid coaches on an estimated £12 million ($15 million) a year after tax, Dalian Pro have taken two points from four matches.

They sit one place above van Bronckhorst's R&F in Group A of the delayed and reformatted CSL, which has been split into two bio-secure "bubbles" to fend off possible coronavirus outbreaks.

Spain's Benitez is keen to emphasise that Dalian are a young side, but the statistics make hard reading for the 60-year-old, who inspired Liverpool to the Champions League title in 2005.

Since arriving in China's northeast in July last year, Benitez has won seven of his 21 matches and averages 1.24 points a game, according to transfermarkt.com.

That is the former Real Madrid, Chelsea and Inter Milan coach's lowest return since he was sacked by Real Valladolid in 1996 after two wins in 23 games.

In a 2-2 draw with FA Cup winners Shanghai Shenhua on Monday, Dalian started with five Chinese players aged 25 or under. Developing local players is prime among Benitez's tasks.

However, they also have proven international experience with former Napoli skipper Marek Hamsik and Venezuelan ex-Premier League striker Salomon Rondon, who scored both goals to rescue a point against Shenhua.

"People just analyse the result at the end of the game but our performance in the second half against Shenhua was quite good so I'm really pleased with the progression of the players and hopefully we can see that progression in the final score," Benitez said in an interview aired Thursday.

"If Chinese football wants to grow and improve, what they have to do is concentrate on training sessions, coaching and the work of players, not just the final score."

"That means we will need some time," he said.

Since the CSL kicked off five months late and behind closed doors because of the coronavirus, Benitez has cut a hot and bothered figure at times -- and not just because of the summer humidity.

His press conference following a 2-1 defeat to Jiangsu Suning lasted barely two minutes and he repeated "I didn't like the game" three times.

Former Barcelona and Arsenal star van Bronckhorst, who is in his debut season in China, has taken one point in his first four matches at R&F.

The same defensive frailties of previous years are again in evidence, but the goals have dried up at the other end too.

R&F have scored only once and last season's CSL top-scorer Eran Zahavi is yet to fire, the Israeli missing a penalty in Sunday's 2-0 defeat by unbeaten Jiangsu.

The 45-year-old van Bronckhorst, who was without former Tottenham Hotspur midfielder Mousa Dembele, said his team are suffering a lack of confidence.

"Overall in the game we did not play as I wanted," said the former Netherlands captain, who hopes to have Dembele fit to face Dalian.

"But I can't complain about the attitude of my players, in the second half they gave everything they've got."

"I know this team has it in them," he added.

Although pressure is growing on the two coaches, there are no indications that Benitez or van Bronckhorst will be fired if they lose on Saturday.

The season is in its infancy, the coronavirus upended preparations and van Bronckhorst in particular needs more time to stamp his mark on his squad.

But Roberto Donadoni was sacked by Shenzhen this week after two wins in 14 matches stretching back to last year, proving that CSL owners will not hesitate to pull the trigger. 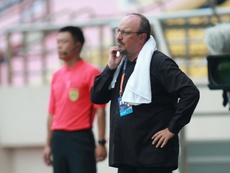 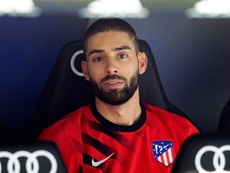 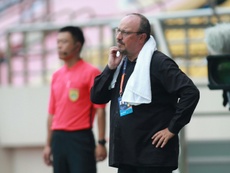 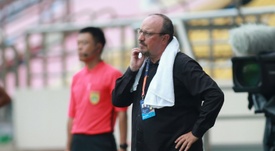