World Champions left in shock as South Korea knock them out

The final match in Group F produced the upset of the tournament so far, as South Korea bagged two late goals to send Germany to an early exit.

This game was always going to prove a difficult test, given how poor the German's had played so far in the tournament after losing to Mexico, and needing a last-ditch goal from Toni Kroos against Sweden to salvage some hope of making it in to the last 16.

The first half started in sloppy fashion, with neither team really having any proper chances to try and get ahead. As the half went on, Germany started to gain more posession and dictate the tempo of play, but the side seemed to be too sluggish to break the deadlock nevertheless.

Manuel Neuer gave his team an early scare when the ball spilled out of his hands following a Korean free kick, the captain managing to leap to get the ball out of the danger area.

Otherwise, South Korea did not particularly test the Bayern Munich goalkeeper in the first period, while his opposite number Jo was not as busy as many would be expected.

The 'Die Mannschaft' had a host of chances, particularly down the right flank, but the delivery from Leon Goretzka and Joshua Kimmich was poor and was never able to find a target in the box.

As the 2014 champions entered the second 45 minutes, their build-up play and delivery improved significantly, with Kimmich in particular making an improvement in the quality of his crossing.

Despite this, German finishing was found wanting on numerous occasions, as shown by Goretzka's tame header in the 47th minute, which admittedly brought an impressive stop from the Korean Jo.

With the game getting nearer and nearer its conclusion, there were a host of German players who were not performing at their best.

Striker Timo Werner could have had a hat-trick had he been more clinical in front of goal, Mesut Ozil was absent for large periods of the game, Toni Kroos shot over the bar on multiple occasions from distance and Matts Hummels had a few excellent chances to put his team in front from set pieces which he could not convert.

Korea were looking dangerous on the counter attack, and however competent Niklas Sule and Hummels are as defenders, the warning signs were there when Son Heung-Min played in his team-mate Kim on the overlap, with the Korean getting the ball caught under his feet to miss what should have been an easy finish.

The first blow was struck from a corner, when the ball somehow managed to find its way through to Kim Young-Gwon, who took a touch and blasted the ball high in to the net. VAR was used to see if the defender was offside, but correctly ruled that the goal should stand.

The goal sent Germany in to disarray, with the team frantically trying to get a shots away to shrink the deficit. They were even so desperate that keeper Manuel Neuer took it upon himself to play as a midfielder.

And while excellent with his feet, he was about to find out why goalkeepers should stay in goal, as he lost the ball in the Korean half cheaply. The opposition punted the ball up field where a grateful Son Heung-Min was waiting to chase after the ball and tuck home his country's second into an empty net.

Both teams exited the competition on the final whistle, and the usual tears and looks of despair ensued. But while South Korea will get a hero's return for the result of this match, their opponents will get anything but when their plane touches down in Germany. 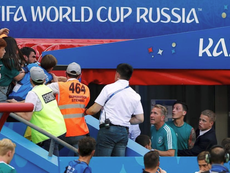 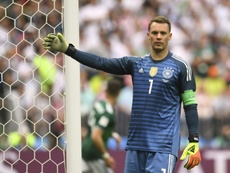 'This was not the Germany we know, it was pathetic' 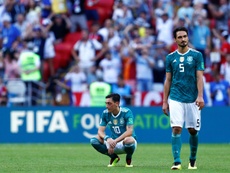 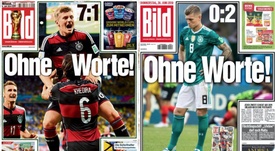