BeSoccer 1 day ago 1.4k
Eduard Romeu spoke about the delicate situation the club is going through. AFP
Barcelona's economic vice-president Eduard Romeu was quite clear in an interview given to 'Sport'. Romeu said the club needed two years to recover and complete big deals.

Barcelona are working to reduce as little as possible the inheritance left by the previous board. The club's financial situation is very delicate and Eduard Romeu could not be more clear in his message, as he already told 'TV3'.

"It's very important for Barca to recover the model they should never have abandoned, with La Masia as the backbone of the team and the stars as complements," the economic vice-president began telling 'Sport'.

Likewise, Romeu continued in the same vein: "I have to be sensible: we won't be able to sign the best players in the world for two years. Now we have other priorities: reduce salaries and put them at the market value. This is the handicap we have with regards to other clubs."

In relation to Messi's video, which was a setback commercially, this is what he said. "We have a great group of young players the Barca DNA. You have to have patience with all of them. We have a lot of players with commercial value and we can't focus just on one. It would be very helpful for there to be a wider range of fooballers and for all the spotlight not to be on just one footballer as happened with Leo Messi."

Eduard Romeu gave a cast iron defence of the Barca brand, the most valued on the planet. "This is what the Forbes magazine says, I'm not saying it myself. Having a Messi dependency financially would end sooner rather than later, because in some moment he will leave the field of play. For now, we know what we are saving. Knowing what we have stopped earning is more complicated. At the moment, we haven't noted the consequences in negotiations of sponsorship contracts," he said.

Lastly, the Barca economic vice-president referred to the redevelopment of the Santiago Bernabeu in the middle of a pandemic. "I could say that they've got lucky, but you have to make your own luck. They made good decisions and got lucky. It makes me angry that we've done things worse than we've ever done before. 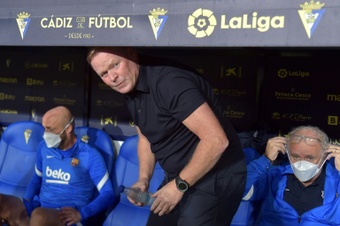