Northern Ireland goalkeeper Michael McGovern spent last season toiling for Scottish strugglers Hamilton Academical, but his brilliant display against Germany at Euro 2016 made him the toast of Paris.

The 31-year-old pulled off save after save on Tuesday to frustrate the world champions and while Mario Gomez found a way past him in the 30th minute, it was only thanks to McGovern's electric reflexes that the score remained 1-0.

Captivating the 46,000-capacity Parc des Princes, and reaching the last 16 in the tournament, was a world away from his experiences with Hamilton, whose average home gate last season was 3,027. But Northern Ireland manager Michael O'Neill said that his role in their relegation battle had been ideal preparation.

"Playing for Hamilton Academical, he makes a lot of saves every week," said O'Neill.

"Coming into this game, he was well prepared. He's an exceptional goalkeeper.

"The type of saves he made tonight showed that -- not only his bravery, but his speed in closing people down and how he comes off his line. He didn't put a foot wrong all night.

"The players gave him a round of applause when he came in the dressing room. When that happens, you don't really need the manager to say any more to be honest.

"It was a phenomenal performance and up there probably with the great goalkeeper performance we've had in the past from the likes of Pat Jennings, Tommy Wright and Maik Taylor.

"I'm delighted for Michael because he's waited a long time to play at club level and international level and he's certainly taken the opportunity."

McGovern has learnt the value of patience in his career, having spent seven years at formative club Celtic without making a first-team appearance.

He had to wait five years to be awarded his second Northern Ireland cap -- between 2010 and 2015 -- and it was not until last year that he supplanted former Manchester United goalkeeper Roy Carroll as his country's number one.

McGovern's show-stealing performance against Germany, whose manager, Joachim Loew, praised his "great reflexes", came at a time when his club career is in suspended animation.

His contract with Hamilton is due to expire next week and O'Neill said that he was likely to attract interest from teams on both sides of the border.

"I believe there's a number of clubs in Scotland that have interest in him," said O'Neill.

"I'd be surprised if there's not clubs in England that would be interested in Michael."

McGovern has never conceded more than one goal in his 14 international appearances and Hamilton manager Martin Canning, whose side finished one place above the Scottish top-flight's relegation play-off berth, has admitted that he faces a struggle to convince his captain to stay.

"If he moves on, I'll be the first to shake his hand and thank him for everything he's done for the club," Canning said in April.

"Guys like Michael deserve to go and test themselves and play at the highest level they can."

In the short term, McGovern and his Northern Irish team-mates must wait until the end of the group phase to discover whether they will face hosts France or neighbours Wales in the next round.

Reflecting on Tuesday's game, McGovern said: "I was busy, but it was mentally very hard.

"We knew every goal was crucial so wanted to keep keep it at one and maybe nick a goal of our own.

"Germany had a slow start, but they were excellent today. We could not get out. I've never had such a busy night and I've never played against such quality opposition."

As new horizons approach with both club and country, it is something he may have to get used to. 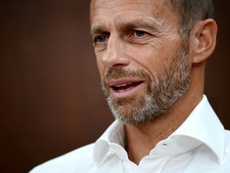 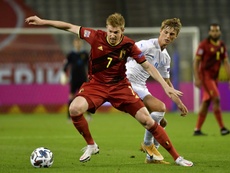 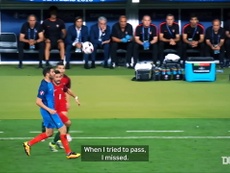 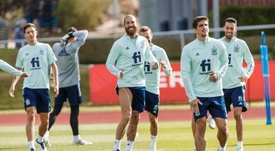