Correa and Vrsaljko are Atletico players with COVID-19

Atletico Madrid breathed a sigh of relief on Monday after further coronavirus tests on their players and staff turned up negative, allowing the team to travel to Portugal on Tuesday for their Champions League quarter-final against Leipzig.

Tests at the weekend had revealed two coronavirus cases at the club, which Atletico confirmed on Monday to be players Angel Correa and Sime Vrsaljko. Both players are asymptomatic and will remain isolated at home while the rest of the squad will return to training in the Spanish capital on Monday afternoon, before flying to Lisbon on Tuesday for Thursday's game against Leipzig.

"The first team and members of the coaching staff underwent new PCR tests yesterday, the result of which has been negative in all of them, after the appearance of two positive cases in the tests carried out on Saturday," Atletico announced on Monday. "As a result, 21 first-team footballers plus academy players Alex Dos Santos, Manu Sanchez, Riquelme and Toni Moya will travel to the Portuguese capital tomorrow to gather for the Champions League quarter-final."

The club said the case of Vrsaljko "is considered resolved by the health authorities as he generated antibodies several months ago". Atletico added that "tests were also performed on relatives living with the two positive cases, all of which were also negative."

The original plan was for Atletico to travel to Portugal on Monday night, with a session scheduled on Tuesday at Benfica's Seixal training ground. The timetable has had to be adjusted but the team will stay in the same hotel in Lisbon, where all the Champions League's remaining games are taking place in a compressed format without fans.

UEFA had stated Atletico would have to have a minimum of 13 players available, including one goalkeeper, to fulfil the fixture, amid fears that more positive cases could emerge. A planned training session on Monday morning had been called off, with all players and staff instructed to stay at home.

The 'final eight' format begins with Atalanta against Paris Saint-Germain on Wednesday, with the final scheduled for August 23. UEFA protocol for the tournament states all clubs must undertake testing between 10 and 14 days before their first game in Portugal, as well as another round of tests before leaving their home country. Final tests are then completed the day before kick-off, which will be replicated for all further fixtures in the competition.

Atletico were keen to reassure UEFA that they have followed a strict protocol since the La Liga season ended on July 19. Weekly tests were carried out by the club on July 26 and August 2. More tests were then held at their training ground in Majadahonda on Saturday and after receiving the two positive results, Atletico alerted the Spanish and Portuguese health authorities, as well as UEFA, the Spanish football federation and the Spanish government's Ministry for Sport.

Spain has been one of the countries worst affected by the coronavirus pandemic, with 310,000 registered infections and 28,500 deaths. Although most sports have returned in some form, there are concerns that case numbers are beginning to rise again. In recent days, Spain has seen local quarantines imposed in the Basque Country, Catalonia and Aragon while protective face masks have been made compulsory in several busy areas, especially in the Madrid region.

Madrid were knocked out of the Champions League by Manchester City on Friday. Sevilla will face English club Wolves in the quarter-finals in Germany on Tuesday. 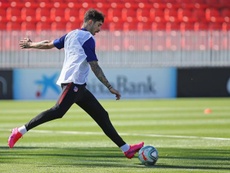 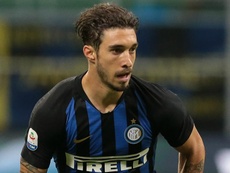 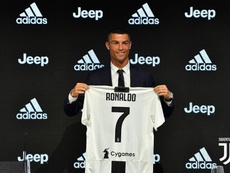 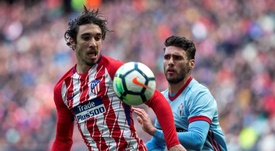 Vrsaljko set for Tuesday medical ahead of Inter move