A Richarlison goal followed by a brace from Dominic Calvert-Lewin gave a clinical Everton a 3-1 victory over Chelsea at Goodison Park in the Premier League. The Toffees are now two points clear of the relegation zone. Mateo Kovacic had pulled Chelsea back into the game in the second half to make it 2-1.

Three days after being rolled over at Anfield and dropping into the bottom three, Everton bounced back in the perfect manner with a great 3-1 win over Chelsea. The mood around Goodison Park was vastly different to that of previous matches after Duncan Ferguson had been announced as caretaker manager to replace the sacked Marco Silva and that showed in the players' performance.

Lampard's men started bright good moves from Azpilicueta and Willian, but inside five minutes they were behind. Calvert-Lewin and Richarlison combined before Sidibe put in a fabulous cross and the Brazilian headed home from six yards to send the home fans crazy. It was against the run of play, but that lifted Everton and Richarlison nearly doubled Everton's lead six minutes later, but he could not quite get on the end of Walcott's cross.

Chelsea were shaken and thanks to their goalie Kepa, they were not two down inside 16 minutes after the Spaniard made a tremendous save to deny Dominic Calvert-Lewin. Chelsea then picked up, but failed to take advantage of a mjor blunder by Michael Keane in defence. Then, Tammy Abraham flicked one wide after 27 minutes following good build-up play by Willian and Abraham almost tapped home Mason Mount's delivery six minutes later.

The visitors were unable to threaten the Everton goal despite Willian and Pulisic causing trouble down the flanks and having 74% possession in the first period. The closest they came is when Pulisic's pass to Willian had to be cleared near the goalline by Lucas Digne. After the break, things got worse for Frank Lampard's men.

Calvert Lewin headed over Sigurdsson's free-kick and then four minutes after the resumption, Calvert-Lewin made it 2-0. Zouma skied a clearance up in the air, he and Christensen could not deal with it as it came down and the Everton man fired home the loose ball. It was absolutely comical defending by the Londoners and they were made to pay for it. Richarlison was denied by Kepa two minutes later or it would have been three. However, seconds later, Chelsea were back in the game.

Azpilicueta's pass into the area was cleared away by Digne and Kovacic hit a thunderbolt into the bottom corner from 25 yards. Despite Abraham clearly blocking Pickford's view, he was not in an offside position so the goal stood. Following the goal, the match became very open. Schneiderlin hit one wide while Kepa made a fabulous stop to deny Theo Walcott. At the other end, Kovacic and Mount failed to hit the target despite having very clear openings.

Richarlison was replaced by Davies 20 minutes from time and within two minutes, he threw himself at a Digne cross, but he was unable to connect properly with his head. Chelsea though were not done and Christensen narrowly fired one wide while Mount and Azpilicueta were brilliantly denied by Everton within seconds. The Toffees' defence held firm despite being under threat and six minutes from the end, the result was beyond doubt.

Kepa made a terrible error giving the ball straight to Walcott, Calvert-Lewin then played a lovely backheel to Davies and after twisting and turning in the box, he was stopped. Davies may have been fouled and Calvert-Lewin fired home the loose ball. Everton were clinical while Chelsea lacked the killer touch in the final third, that was the difference.

The six minutes of injury time passed off almost without incident with the exception of an off target Pulisic shot and there were jubilant scenes at the final whistle among the home faithful. Everton are now two points clear of the relegation zone while Chelsea stay in fourth and need to show a bit more cutting edge against Lille in midweek if they are to progress to the last 16 of the Champions League. 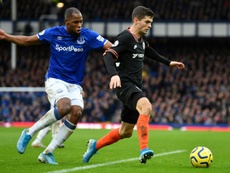 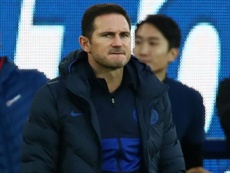 Lampard not yet considering transfer window despite Everton defeat 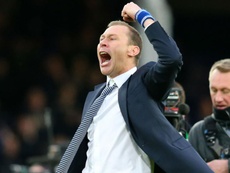 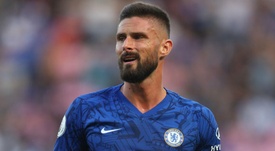 Everton v Chelsea - as it happened