Brighton survived late penalty controversy to secure their first ever victory at Aston Villa on Saturday.

At Villa Park, Brighton's 2-1 success ended a run of seven games without a win in all competitions, but it didn't come easily for the Seagulls.

Graham Potter's side, who had won only once in the league this term, took the lead through Danny Welbeck before Ezri Konsa's equaliser for Villa.

Solly March put Brighton back in front, but Brighton defender Tariq Lamptey was sent off for a foul on Jack Grealish in stoppage-time.

Villa were controversially denied a penalty in the final seconds when Michael Oliver gave a spot-kick for March's challenge on Trezeguet, only for the referee to change his mind after consulting the pitchside monitor.

In the 12th minute, Welbeck took Adam Lallana's pass near the halfway line, sprinted away from the sluggish Villa defence and clipped a cool finish over Emiliano Martinez.

It was the 29-year-old's first goal since July when the former Arsenal forward netted in his last game for Watford.

Fresh from his fine performances for England during the international break, Grealish was full of confidence and the Villa captain's curling effort was well saved by Mat Ryan.

Ryan saved with his leg to keep out Tyrone Mings' close-range effort, but a game full of chances finally featured a Villa goal in the 47th minute.

Bertrand Traore's free-kick reached Konsa at the far post and the unmarked Villa defender slid in for a clinical finish.

March restored Brighton's lead from Pascal Gross's pass in the 56th minute, bending a superb strike into the top corner from the edge of the area. 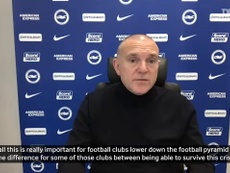 VIDEO: 'Having fans back an important first step' - Barber 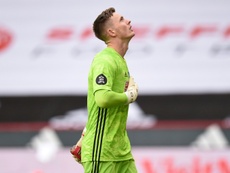 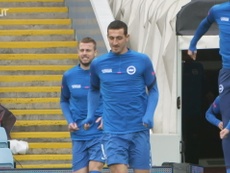 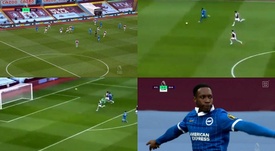