Real Betis could be interested in the loan of L. Cabrera currently playing for Espanyol

Betis are continuing with planning their squad for next season. Alexis Trujillo confirmed this Friday that he will meet with Manuel Pellegrini to carry out an analysis of the team.

One of the positions which Betis want to reinforce is the defence and, according to 'Mundo Deportivo', Betis are reportedly interested in getting hold of Leandro Cabrera's services.

The Espanyol player, whose relegation was mathematically confirmed after losing by one goal to Barcelona, has a contract at the club until June 2024 and he could go out on loan.

The loan deal, just like with Raul de Tomas, would only happen if the club which took him on paid his full salary.

Real Betis could be interested in the loan of L. Cabrera currently playing for Espanyol 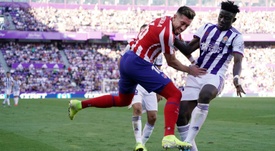