Arsenal fight back to salvage point against Spurs

Arsenal fought back from two goals down to salvage a 2-2 draw against Tottenham in a pulsating north London derby on Sunday which both sides will feel they should have won.

Spurs preyed on the Gunners' vacant midfield early on as Christian Eriksen tapped home at the end of a flowing counter-attack before Harry Kane's penalty doubled the Champions League finalists' lead.

However, Arsenal were always a threat going forward and, after Alexandre Lacazette reduced the arrears in first-half stoppage time, were well worthy of a point after the break.

Pierre-Emerick Aubameyang got the equaliser 19 minutes from time and Arsenal even had the ball in the net again through Sokratis Papastathopoulos, only to see their celebrations cut short by the offside flag.

A share of the spoils sees Arsenal maintain a two-point lead over their local rivals with seven points from the opening four games to Tottenham's five.

Tottenham's long wait for an away win in the Premier League dating back to January also continues, but they did show some resolve after a desperately disappointing 1-0 home defeat to Newcastle last weekend with manager Mauricio Pochettino complaining afterwards of having an unsettled squad.

The Argentine had sidelined Eriksen and Jan Vertonghen in the opening month of the season but both returned and the Danish midfielder had a huge impact and an open and frantic encounter.

Arsenal boss Unai Emery named the front three of club record signing Nicolas Pepe, Aubameyang and Lacazette together in his starting line-up for the first time, but the Gunners lacked any balance to their attacking intent as Tottenham counter-attacked with ease early on.

The visitors went in front with their first serious attack 10 minutes in as Son Heung-min latched onto Kane's knockdown and freed Erik Lamela through on goal.

Bernd Leno got a weak hand to Lamela's effort and palmed the ball into the grateful path of the onrushing Eriksen to tap home.

Leno redeemed himself with a stunning save to prevent Son making it 2-0 and also turned a dipping Eriksen free-kick to safety.

However, Leno was helpless to stop Kane continuing his excellent record in the north London derby from the penalty spot after a ludicrous challenge by Granit Xhaka to clearly chop down Son inside the area.

To their credit, Arsenal raised themselves off the canvas to reduce the deficit before the break.

Hugo Lloris made a fine save low to his right to deny Pepe his first Arsenal goal, but moments later Lacazette burst through before blasting past his French international teammate from a narrow angle to give the Gunners hope.

A wild second period raged from end-to-end as Son saw a shot deflected inches wide and Kane struck the inside of the post at one end, while Lloris made a brilliant save to deny Matteo Guendouzi and Sead Kolasinac somehow skewed wide from point-blank range at the other.

Arsenal, though, were the side in the ascendancy and got their reward with an equaliser.

Lacazette had been sacrificed for Dani Ceballos to bolster the midfield and that allowed Aubameyang to move into his favoured role through the middle.

Guendouzi was the creator as his cross was expertly turned home by Aubameyang for his third goal of the season.

Arsenal did not settle for a point as Sokratis thought he had bundled home the winner from Kolasinac's cross only for the latter to be ruled offside.

However, it was Spurs who passed up a host of promising positions to snatch the winner in stoppage time with Kane seeing appeals for another penalty waived away. 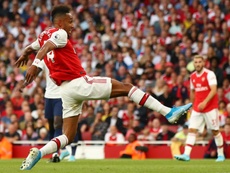 Aubameyang says Spurs were lucky to get a draw 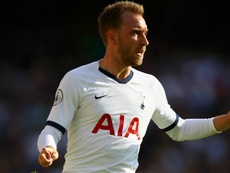 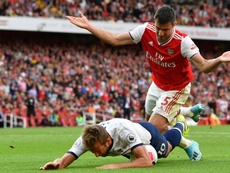 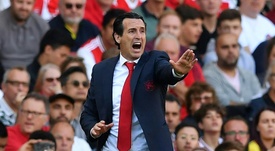 Lacazette and Aubameyang pegged Spurs back