Nobody expected it, but an incident in the match between Harkemase Boys and Hoek, two teams from the third division, went viral. And the referee scored a goal. According to the laws of the game, the goal is legal and it counted. Next season, it would have been disallowed though. 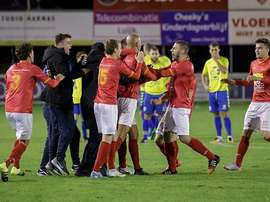 They won the penalty shootout... and were still knocked out!

Imagine winning a nerve-wracking penalty shootout to take you to the next round, only for the shootout, not the game, to be later ordered to repeat.