Paris Saint-Germain can belatedly wrap up another domestic treble on Friday when they face Lyon in the final of the French League Cup, but their build-up to the game has been overshadowed by Kylian Mbappe's ankle injury.

The World Cup-winning superstar was crocked in last Friday's French Cup final against Saint-Etienne in the first competitive game on French soil since the coronavirus-imposed shutdown in March.

Mbappe was left with a sprained right ankle after a crunching challenge from Saint-Etienne's Loic Perrin and looks certain to miss the game that really counts for the Qatar-owned club, the Champions League quarter-final against Atalanta on August 12. On Thursday, PSG coach Thomas Tuchel admitted it would take "a miracle" for the 21-year-old to recover in time for that game in Lisbon.

Angel Di Maria has already been ruled out of that match because of suspension, and asked if there was any hope for Mbappe, Tuchel said: "Yes, always, but it's going to be tight. Every day counts for us to produce a miracle." PSG were handed a third straight Ligue 1 title by virtue of being top of the table when the season was ended in April with 10 rounds of matches unplayed because of the health crisis.

They came out of the long shutdown to win their fifth French Cup in six years by beating Saint-Etienne 1-0 thanks to an early Neymar goal. That game was played in front of just 2,800 spectators inside the 80,000-seat Stade de France due to restrictions on gatherings. Friday's game against Lyon will go ahead in front of a similarly limited number of fans.

Postponed in early April, it will be the last ever final of an unloved competition, albeit one which PSG have also dominated, with five successive victories -- and eight overall -- before Strasbourg won it last year. For both teams, it is a last chance to prepare in a competitive environment before resuming their Champions League campaigns.

PSG head to Lisbon for the final stages after their win over Borussia Dortmund in the last 16 in March. Meanwhile, Lyon have to go to Italy on August 7 to face Juventus defending a 1-0 lead from the first leg of their last-16 tie played in February. Both clubs fear being at a disadvantage given all their Champions League rivals returned to complete their domestic seasons while France opted not to. Juventus and Atalanta play their final games in Serie A this weekend.

However, Tuchel said the final cannot be used to prepare his team to face Atalanta. "It is not possible to prepare tactically for Atalanta because I don't know any team that plays the way they do," said the German. "The only thing we can prepare is our own mindset. "Being without Kylian has a big influence, that's clear. I hope we can find the solution."

The game will be played in searing heat, with temperatures in the French capital forecast to reach 40 degrees Celsius on Friday. Lyon are chasing a first piece of silverware in eight years and have extra motivation to win the trophy. Having failed to qualify for Europe next season via the league, Rudi Garcia's team have to beat PSG to secure a place in the qualifying rounds of the Europa League.

If they fall short, they will need to win the Champions League in Lisbon on August 23 to feature in continental competition again next season.

"This is a terrific opportunity to win a trophy," said Garcia. "PSG might be a level above us but we have a top-class team too and one that is also in a position to qualify for the Champions League quarter-finals. There is only positive pressure on us." 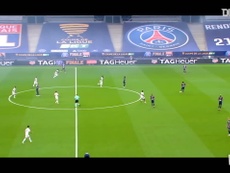 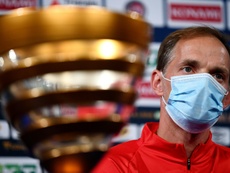 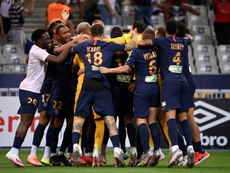 You need Domino to save him lol 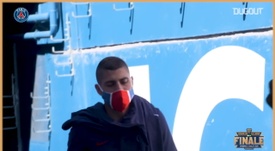 VIDEO: Paris Saint-Germain's last training before the clash against Lyon