Messi out but Conte expects Inter to suffer

Barcelona star Lionel Messi will not make the trip to the San Siro for Tuesday's final Champions League group game, but Inter Milan coach Antonio Conte still expects a tough test as his side bids to reach the last 16.

Barcelona are already through to the knockout rounds after six-time Ballon d'Or winner Messi scored in a convincing 3-1 victory over Borussia Dortmund last time out.

The Argentine has been left out of the 20-man squad along with midfielder Sergi Roberto. Coach Ernesto Valverde's side will also be without injured the Ousmane Dembele, Jordi Alba, Nelson Semedo and Gerard Pique.

The Spaniards are assured of finishing top of Group F as they have 11 points from five games.

Inter are second, level on seven points with Borussia Dortmund who host Slavia Prague, but the Italians will qualify if the two clubs finish on the same number of points due to their superior head-to-head goal difference.

"We're talking about Barcelona, one of the strongest teams in the world with a very strong squad of 20 to 22 players," said Conte.

"Barcelona remain one of the four or five teams that every year sets out to win the competition.

"For their part, they are calm in first place and will play without pressure and can create problems. We have to give everything knowing that it might not be enough."

Barcelona beat Inter 2-1 at Camp Nou last time out, but Conte believes his team have grown since then as they sit top of Serie A.

"In Barcelona we played a very good game with great courage and personality, but the defeat came thanks to their great players. It's been a while, we've grown in some respects."

The former Chelsea and Juventus coach hopes a capacity San Siro crowd can pull the three-time former European champions through.

"Our stadium can give us a lot of positive energy and I am sure it will. We all want to get to the last 16, it would be a prestigious goal." 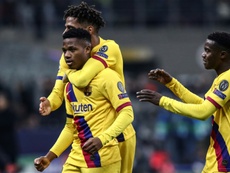 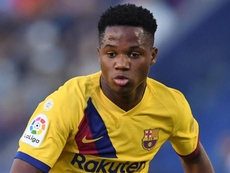 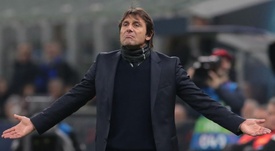