Bayern Munich were cruising to a return to form in the Bundesliga until Hertha Berlin's stunning second-half fightback earned a draw.

Bayern Munich's difficult week continued as Hertha Berlin came from two goals down to claim a 2-2 draw in a pulsating clash at the Olympiastadion, where Franck Ribery was forced off by a potentially serious knee injury.

Trailing 2-0 in the 49th minute, the home side turned the match around in the space of seven second-half minutes to dramatically deny Willy Sagnol a debut victory as Bayern boss.

Sagnol was installed on an interim basis following the sacking of Carlo Ancelotti on Thursday and appeared on course to start his stewardship with three comfortable points.

Dropped for the 3-0 defeat at Paris Saint-Germain, the result that cost Ancelotti his job, Mats Hummels joined Arjen Robben and Franck Ribery in the champions' starting XI and dispatched an early header to make it 1-0.

And when Robert Lewandowski added a second shortly after the restart, the visitors appeared set to put a dramatic few days behind them.

But Ondrej Duda and Salomon Kalou responded for Hertha in a chaotic spell to ensure Bayern stay five points off pacesetters Borussia Dortmund, with the injury to Ribery adding to the Bavarian giants' growing list of problems.

Sagnol had no hesitation in recalling Ribery and Robben and the pair immediately linked up for the game's opening chance, with the Frenchman nodding tamely from Robben's clever cross.

Hummels was determined to prove a point of his own and should have done better when he headed Joshua Kimmich's corner past the post.

The Germany defender made no mistake a second time around, though, as he expertly directed Jerome Boateng's cross beyond an outstretched Rune Jarstein for a 1-0 lead.

Hummels' opener arrived in just the 10th minute and the action remained relentless, with Hertha having a penalty overruled by the VAR after Javi Martinez was initially punished for a challenge on Vladimir Darida.

Bayern's aerial dominance continued as Martinez whistled a header over the bar, before Lewandowski twice went close to doubling the advantage amid a near-constant stream of chances.

The striker first saw a dinked finish cleared off the line by a recovering Niklas Stark after the ball broke kindly in the area, before he next fired narrowly wide on the turn as Hertha somehow escaped to half-time with only a goal deficit.

Made at centre back pic.twitter.com/rbXhdnbs1e

Almost unthinkably, the end-to-end drama only intensified in the moments after the restart.

Lewandowski muscled his way to goal and beat Jarstein in a one-on-one to extend the visitors' advantage, but their 2-0 lead lasted only two minutes as Genki Haraguchi splendidly weaved through a crowded penalty area and teed up Duda for a simple tap-in.

And it was 2-2 in the 56th minute, with Kalou firing home at close-range after Corentin Tolisso missed a chance to head away Karim Rekik's free-kick.

Sagnol's mounting headaches grew when Ribery trod on the ball and hobbled off with what appeared to be a potentially long-term knee injury.

The stoppage in play for the winger to receive treatment served to halt Hertha's momentum, enabling Bayern to stabilise and secure what proved to be a hard-earned point. 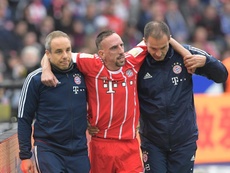 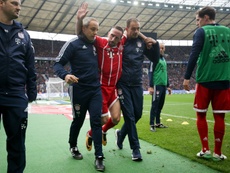 Ribery injury 'does not look good' 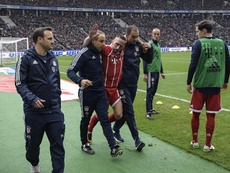 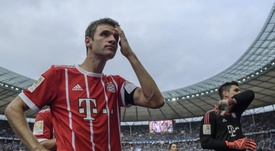