Edinson Cavani inspired Manchester United's thrilling fightback from two goals down to snatch a dramatic 3-2 win against Southampton on Sunday.

Ole Gunnar Solskjaer's side were facing a dismal defeat after first half goals from Jan Bednarek and James Ward-Prowse put Southampton in control at St Mary's.

Adding to Solskjaer's problems, United lost goalkeeper David de Gea to a knee injury at half-time. But Uruguay striker Cavani sparked United's escape act after coming on at the interval. Cavani set up Bruno Fernandes to reduce the deficit and the former Paris Saint-Germain star grabbed the equaliser from his team-mate's deflected shot. The 33-year-old netted again in the final moments as his third goal since signing as a free agent in October extended United's winning to four games in all competitions.

United climbed to seventh place, two points adrift of the Champions League places, after setting a club record of eight successive away Premier League wins. It was exactly the kind of influential display Solskjaer was hoping for from Cavani when he moved for him after United's failed pursuit of Borussia Dortmund's Jadon Sancho.

Written off as a panic buy in some quarters, Cavani proved his age should be no barrier to making an impact in the Premier League. He is only the second player to be directly involved in three goals in a Premier League game after coming on as a substitute for United since Solskjaer scored four against Nottingham Forest in 1999.

United had started brightly and Mason Greenwood rounded Saints keeper Alex McCarthy, only to shoot into the side-netting with the empty goal at his mercy. Fernandes needed treatment after a heavy challenge from Oriel Romeu, but he almost exacted immediate revenge when his deflected effort clipped the outside of the post.

Southampton took the lead against the run of play in the 23rd minute. Ward-Prowse curled a corner to the near post and Bednarek got in front of Marcus Rashford to glance his header past De Gea from close range. Kyle Walker-Peters nearly caught out De Gea with a low drive from an acute angle that skimmed across goal and struck the far post.

United were almost gifted an equaliser when McCarthy's woeful pass was seized on by Greenwood, but the keeper redeemed himself with a brilliant double save, repelling the teenager's shot and then blocking Fernandes's follow-up.

Ward-Prowse doubled Southampton's lead in the 33rd minute. Taking aim from the left side of the United area, Ward-Prowse curled a superb free-kick over the wall and past De Gea, whose despairing attempt to claw it out sent him clattering into the post. David Beckham is the only English player to have scored more direct free-kicks than Ward-Prowse's nine in the Premier League era.

De Gea might have felt he could have done better having got a hand to it, but Dean Henderson made his first Premier League appearance for United when he replaced the injured Spaniard at half-time. It was Cavani's introduction that proved decisive after a curious late arrival on the pitch as he sorted out his boots.

Cavani linked up with Fernandes to reduce the deficit in the 59th minute as his cross reached the Portugal midfielder, who swivelled to fire home from 10 yards. Since his United debut in January, Fernandes has been involved in a league-high 25 goals, scoring 15 and providing 10 assists.

Cavani's experience and quality provided United with a big lift and he was inches away from equalising with a header from Aaron Wan-Bissaka's cross. Cavani completed United's comeback in the 74th minute when he instinctively threw himself at Fernandes's deflected shot and headed in from close range.

United weren't finished yet and two minutes into stoppage time, Rashford sent a cross towards Cavani, who stooped to guide a superb header past McCarthy. 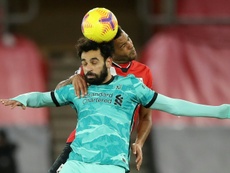 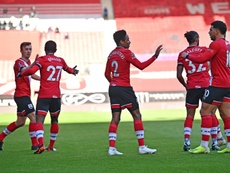 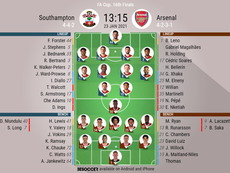 Southampton v Arsenal - as it happened 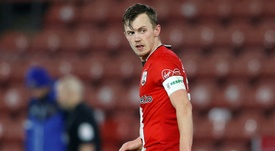 Ings doubtful for Leicester game after testing positive for COVID-19