Antoine Griezmann won praise from his Atletico Madrid coach Diego Simeone after starring in a 4-1 comeback win away to Copenhagen.

Diego Simeone was satisfied to see Atletico Madrid come from behind to build a 4-1 lead away to Copenhagen in the first leg of their last-32 Europa League tie.

Viktor Fischer gave the Danish champions a shock advantage in the 15th minute, but it was short-lived as Antoine Griezmann soon crossed for Saul Niguez to head home.

Griezmann was influential throughout and he combined in stunning fashion with Lucas Hernandez to set up Kevin Gameiro before the break, before extending Atletico's lead himself after the interval.

Vitolo came off the bench to wrap up a comfortable win at a snowy Parken Stadium and Simeone was pleased with the response of his side after falling behind, picking out Griezmann for particular praise.

"I'm very happy with the performance," Simeone told a post-match news conference. "We became more secure after the equaliser and all in all it was a complete performance".

"FCK came out as we expected and got the goal they were hoping for, but the most important thing is our performance. Griezmann performed like he has done lately; the way we played, with a lot of combinations, suited him well, and he is in a good period at the moment."

Diego Godin returned to action after undergoing reconstructive surgery following a painful collision with Valencia goalkeeper Neto at the start of the month, which left the centre-back with a missing tooth.

"Very good, he is very strong in character," Simeone added of the defender's performance. "And he played as if he had never hurt himself."

Despite taking the lead, sloppy defending from the hosts gave Griezmann a series of early opportunities and Copenhagen coach Stale Solbakken accepted his side were too open at the back throughout, ending their chances of progressing to the last 16.

"If you make mistakes like the ones we made in the first 10 minutes you can lose against any team," Solbakken – who was also in charge when Copenhagen lost at home to Atletico in 2007 – said.

"Atletico are definitely one of the best teams we have ever faced. We are stone dead now. We are not alive. Maybe some players who didn't get a chance tonight will get one on the big stage in Madrid." 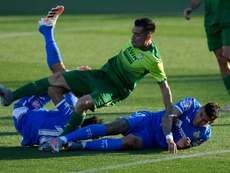 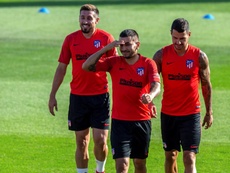 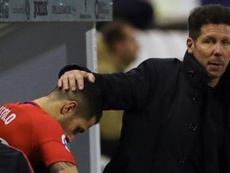 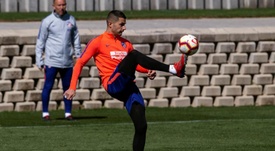 Vitolo suffers an injury to his left thigh