BeSoccer 17 days ago 424
Laporta and Koeman could close the loan signing of Iñaki Peña. EFE
The newspaper 'Sport' claims that Barcelona are working on a loan move for Iñaki Peña in the winter transfer window. The board of directors see it with good eyes and Ronald Koeman, coach of the team, will give the green light as he did not do in the summer before the possibility of counting on him for his plans.

Iñaki Peña was on the exit ramp from Barcelona in the summer, but ended up staying because Ronald Koeman thought he might be able to use him for the first team. He was even rumoured to be the second goalkeeper in case Neto left, but this didn't happen and now he barely gets any playing time.

That is why, now, the board is working to give him a way out in the January transfer market. 'Sport' reports that the board are keen for him to enjoy opportunities and develop. His coach, moreover, will give the green light this time, so there will be no obstacles to his temporary departure.

The player would be happy to sign for a La Liga side. It is his preferred option before a hypothetical trip abroad. He was on the agenda of Granada, who, under the orders of Robert Moreno, may take advantage of this new scenario and appear on the scene, although, for the moment, there are no leaks that warn of this.

Iñaki Peña has not played a single game for Barcelona's senior side this season. He has appeared in a couple of games for the reserve team, to which he has been dropped when his duties in Ronald Koeman's group have given him some breathing space. He now faces the second half of the campaign with the possibility of turning this drought of minutes around. 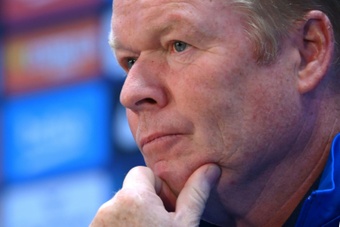 Koeman is safe for now