Jürgen Klopp admits he has not had time to think about Liverpool's incredible home record after his side went 64 games unbeaten at Anfield.... Nuno confident that Adama will renew "Adama? With his strength there is nothing you can do" "One day I woke up and Juventus wanted me, the next day it was United..." "Adama was prepared to make the big step up at Barca"

Tata Martino was the coach who gave Adama Traore his first team debut for Barcelona. The Argentine thought he was capable of making the big step up to the first team, but he ended up going to Aston Villa.

Man Utd in fight to sign CR7 as are Wolves!

The Portuguese looks like he will not renew his Juventus contract and the 'Old Lady' could try and get back in summer 2021 part of the more than 100 million euros they spent on Ronaldo. Leicester moved to the top of the Premier League as Jamie Vardy's penalty earned a 1-0 win against Wolves on Sunday. "I said that Diogo Jota could be the replacement for CR7 and they laughed; and now?

Jorge Simao, Diogo Jota's coach at Paços Ferreira, got things off his chest about the Portuguese footballer's explosion, whom he once compared to Cristiano Ronaldo. He wondered what those who took him for a madman would think now. Liverpool want Adama Traoré. Wolves know it and they are doing everything they can to keep him, the club is preparing a new contract that includes a significant salary raise, according to 'The Sun'. According to the 'Daily Star', Liverpool manager Jurgen Klopp keeps on asking the club to make an effort to try and sign Adama Traore for next season. 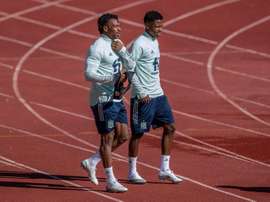 Luis Enrique has started Adama Traoré for Spain's match against Ukraine at the Olympic Stdadium in Kiev, making it the first time he will play alongside Ansu Fati. Adama Traoré spoke to the media following his much-awaited international debut. Traoré, who came from the bench in Spain’s goalless draw against Portugal, was asked about the possibility of him returning to his former club Barcelona and about the body oil he spreads over his arms before playing a game. 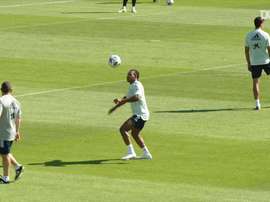 Ansu Fati and Adama Traoré showed off their skills in training with the Spanish national team. Traore not thinking of Barcelona

Adama Traore has been linked with a return to Barcelona in the past but has insisted he is only focused on improving his game at Wolves. He had to wait for his third call-up, but Adama Traoré has finally pulled on the Spain shirt in. His debut came in the friendly against Portugal.

Adama Traoré stayed at Wolves, but not through a lack of offers. Juventus were the last team to try and sign the Spanish international. Diogo Jota explains why it was impossible to turn down the opportunity to join Liverpool, as he discusses his summer 2020 move from Wolves.