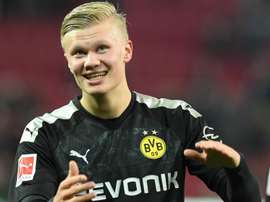 Erling Haaland came off the bench and scored a hat-trick on his Borussia Dortmund debut.

Napoli lost 2-0 at home to Fiorentina, leaving last season's runners-up without a league win at their San Paolo Stadium since October 19 ahead of hosting Barcelona in the Champions League in a month's time.

Jarrow Bowen is one of the players in fashion in the Championship. Amidst interest from Premier League sides such as Newcastle, Hull have offered him a contract extension.

Erling Haaland made an explosive start to life at Borussia Dortmund with a second-half hat-trick. Here are some other great debuts.

Chelsea's attackers must deliver more goals if the Blues are to challenge at the top of the Premier League, Frank Lampard has said.

Arsenal conceded in the 83rd minute of their 1-1 draw with Sheffield United, which Mikel Arteta described as two points dropped.

Sergio Aguero's late double looked to have given the champions three points, but a Fernandinho own goal denied Manchester City.

Leeds' slump went on but Brentford were unable to take full advantage, while Rhian Brewster helped Swansea to victory in the Championship.