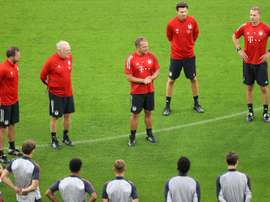 Richarlison was named Everton's Player of the Season for 2019-20, with the striker's Brazil team-mate and idol Neymar presenting the award.

Liverpool assistant manager Pep Lijnders believes new signing Diogo Jota will have no problem making his mark at the club despite some surprise at the reported Â£41 million fee ($54 million) the English champions paid Wolves for the Portuguese international.

Nicolo Zaniolo has had surgery in Austria after suffering another serious injury while he was playing for Italy.

Mourinho challenges Alli to earn his place at Spurs

Tottenham boss Jose Mourinho expects Dele Alli still to Â be at the Premier League club when the transfer window shuts next month, confirming he is in the squad for this week's Europa League fixture.

The Football Association has warned new coronavirus restrictions will have a "huge" impact on the game, with clubs facing the bleak prospect of six more months in empty stadiums.

Bayern Munich boss Karl-Heinz Rummenigge insists the German giants are eager to stop Thursday's UEFA Super Cup showdown in Budapest turning into a super spreader event due to a high infection rate of the coronavirus there.

Wolves announced the signing of Portugal right-back Nelson Semedo from Barcelona on Wednesday for a fee that could reportedly rise to Â£37 million ($47 million).