Chapecoense made an emotional but ultimately disappointing home debut in the Copa Libertadores losing their biggest hometown match since a p... 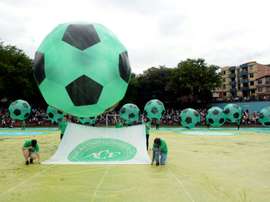 Brazilian football club Chapecoense on Wednesday presented the first three of 20 new players it plans to sign after its squad was wiped out in a deadly plane crash.