Dallas claimed a 3-2 victory over Tauro but they failed to reach the quarter-finals on away goals – the tie ending 3-3 on aggregate.... 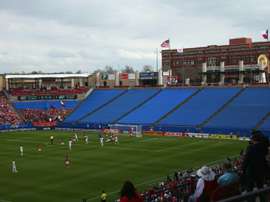 Dallas bounce back with 3-1 MLS win over Fire

Maximiliano Urruti and Mauro Diaz scored in the first half as FC Dallas bounced back from a mid-week defeat with a 3-1 Major League Soccer victory over the Chicago Fire.