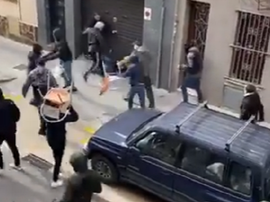 Chairs and punches thrown plus fighting prior to La Liga match

Before the Espanyol v Athletic match, several ultras from both teams provoked moments of panic on the streets near the stadium.

A move to Inter appears to be edging closer for Christian Eriksen, who was left out of the Tottenham team to face Southampton.

Arsenal appear to be closing in on their first signing of Mikel Arteta's reign, with Pablo Mari set to arrive on loan from Flamengo.

Join us for minute to minute coverage of this afternoon's LaLiga clash between Valencia and Barcelona, as Quique Setién gets his first real test since becoming manager!