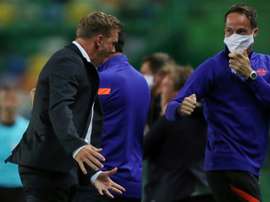 Take a look at Sport Recife's last training session before Vasco da Gama clash in the second round of 2020 Brazilian Championship.