Dortmund, Liverpool, and Atalanta have been praised during the 19-20 season for their attacking football, and it is in large part due to the...

Atalanta crushed Valencia 4-1 on Wednesday to take a giant step closer to reaching the Champions League quarter-finals for the first time. 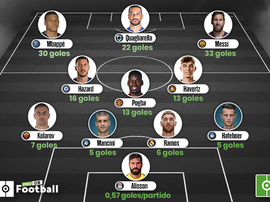 ProFootballDB, BeSoccer's data lab, brings us the most deadly lineup in Europe based on the players who have scored the most goals in their respective positions. And with Alisson between the posts, the team also boasts the goalkeeper who has conceded the fewest times.