Adria Pedrosa has caught the eye of Napoli, at least that is what 'CalcioMercato' says. According to this media outlet, the Neapolitans are ... 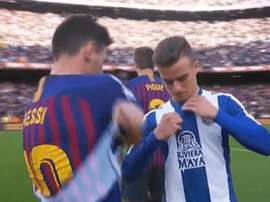 Adria Pedrosa made his debut in the derby and despite the rivalry, he decided to ask Leo Messi for his shirt at the end of the match. A gesture which Espanyol have taken exception to and they have made their displeasure known on social media.