'Neymar's lack of humility is a pity'

Paris Saint-Germain faced Celtic in the Champions League on Tuesday, and the £198m man's behaviour left nobody indifferent.... 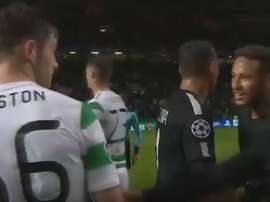 Anthony Ralston believes the world's most expensive player, Neymar, is no different to anyone else and insists he was fearless against the Brazilian during Celtic's loss to PSG.