The Premier League returned in dramatic fashion on Wednesday as Aston Villa's 0-0 draw against Sheffield United featured a powerful anti-racism message and controversy over a goalline technology blunder.

After 100 days in coronavirus lockdown, the eagerly-anticipated first match of the Premier League restart gave players a platform to back the Black Lives Matter movement following the death of George Floyd.

The poignant moment came just before kick-off at Villa Park when referee Michael Oliver blew his whistle and all 22 players and the officials went down on one knee for around 10 seconds.

Both teams were also wearing shirts with players names replaced by the Black Lives Matter slogan, a gesture that will be replicated across the Premier League for the first 12 games. Once the action got under way, that show of solidarity had company in the unforgettable moment stakes.

Late in the first half, a free-kick from United's Oliver Norwood was caught by Villa goalkeeper Orjan Nyland, but he stumbled backwards and looked to have carried the ball over his own goalline.

United players appealed for the goal, but the Hawkeye technology that alerts the referee when the ball has gone over the line did not award it and VAR did not intervene. Despite replays showing the ball had clearly crossed the line before Nyland regained his footing, Oliver had no choice but to let play continue.

There were reports that the goalline technology was not working correctly, but that was not confirmed by the Premier League. In a season already marred by arguments over the effectiveness of VAR before the pandemic hiatus, it was fitting the Premier League was immediately embroiled in another replay row.

United will certainly have cause for complaint if the two points they were denied prove decisive in their fight to qualify for the Champions League. The Blades are now sixth, four points behind fourth-placed Chelsea, while Villa remain in the relegation zone.

Good to be back

The controversy signalled England's top-flight is back, with Britain's Culture Secretary Oliver Dowden hailing football's return as a "hugely symbolic moment" in the nation's recovery from the virus.

Prince William, a noted Villa fan, tweeted: "So good to have football back, we have all missed it!" But much has changed in society since the virus hit and the Premier League has not been immune to those shifts. All 92 remaining matches are being played behind closed doors, with the 300 people inside the stadium all having temperature tests before being allowed entry.

United travelled to Villa Park on three buses to maintain social distancing and walked into the stadium wearing black protective masks with the club badge on. With no fans backing them, United's players jokingly applauded themselves when they ran onto the pitch for the pre-match warm-up.

To cover some of the empty seats, sections of Villa Park were decked out in a combination of flags sent in by fans and banners prepared by the club. An orange steward jacket was left in the Holte End in homage to boss Dean Smith's father Ron, who used to work for the club on match-days and died of the virus last month.

In a change to the usual sight of teams walking out together, there was a staggered entry on to pitch and no handshakes before kick-off. Before the anti-racism gesture, a minute's silence to remember those who have died from the virus was held.

The first English top-flight game played in June since 1947 was played to the eerie silence that has become familiar to fans who have watched matches in Germany and Spain since football returned.

The only shouts, from players and coaches, echoed around the empty stands as Villa's Conor Hourihane had the first shot of the restart when his effort was saved by Dean Henderson. The absence of the crowd was most noticable when Nyland's blunder should have led to United scoring, a flashpoint that would normally have created a storm in the stands but was instead greeted with silence. 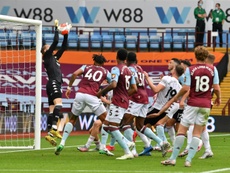 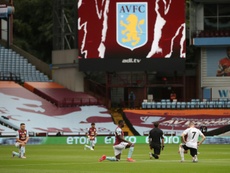 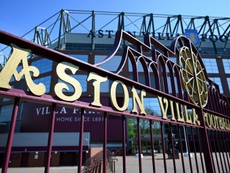 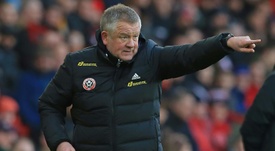 One positive case in latest round of Premier League testing