Despite being defeated against Manchester City, Steve Bruce's kind gesture did not go unnoticed.

Can't help to love Steve Bruce after this video. 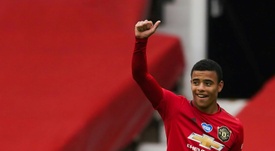