Chelsea paid the price for woeful defending as Jannik Vestergaard snatched a stoppage-time equaliser for Southampton in their dramatic 3-3 draw at Stamford Bridge on Saturday.

Germany forward Timo Werner scored his first Premier League goals to put Chelsea two up in the first half.

But Danny Ings got one back for Southampton before mistakes from Kurt Zouma and Kepa Arrizabalaga gifted an equaliser to Che Adams in the second half. Kai Havertz appeared to have spared his team-mates' blushes when the Germany midfielder restored Chelsea's lead. But Frank Lampard's side were denied when Southampton defender Vestergaard headed home in the closing moments.

Chelsea have just two wins from five league games and have already conceded nine goals. Lampard will be encouraged to see Werner score for the first time in the league in his fifth appearance in the competition since his £45 million move from Leipzig.

The 24-year-old, who scored against Tottenham in the League Cup in September, was a constant threat to Southampton's defence. Havertz was at fault for Southampton's first goal but recovered his composure to deliver the most promising display since his £70 million transfer from Bayer Leverkusen. There was also the welcome sight of Hakim Ziyech making his Chelsea debut in a 19-minute substitute cameo after recovering from the knee injury that delayed his involvement following his move from Ajax.

But, as ever with Chelsea, the miscues from Zouma and Kepa underlined problems that remain unsolved at the back and could prove fatal to their chances of mounting a title challenge. With Senegal keeper Edouard Mendy injured, Kepa was making his first Chelsea appearance in almost a month after being dropped following an error-strewn start to the season, but his latest blunder is likely to see him exiled again. Zouma may find himself axed as well once Thiago Silva is ready to return.

Chelsea had started well and took the lead in the 15th minute. Ben Chilwell aimed his pass towards Werner and the forward came deep to dummy it cleverly behind him before nipping around the bewildered Jan Bednarek. Cutting right across the Southampton area, Werner intelligently guided his shot back to the left and past the flat-footed Alex McCarthy.

Southampton boss Ralph Hasenhuttl signed Werner for Leipzig in 2016 and the talent he identified was on full display with another predatory finish in the 29th minute. Jorginho played a superb first-time pass over Bednarek and Werner controlled on his chest before deftly flicking the ball over McCarthy and heading home under pressure from two defenders.

Southampton have a striker with the clinical instincts to match Werner and Ings gave them a lifeline in the 43rd minute. Havertz was dispossessed too easily inside his own half and Adams slipped a pass through to Ings, who got behind the slow-to-react Chelsea defence, glided past Kepa and slotted into the empty net.

Suddenly, Southampton were in the ascendency and their pressure was rewarded in the 57th minute thanks to blunders from Zouma and Kepa. Zouma started the farcical goal with a woefully under-hit back pass and Kepa poured fuel on the fire when he rushed off his line and completely missed the ball. Kepa crashed into a post in the chaotic scramble that followed but Chelsea could not clear and Adams slammed the ball high into the roof of the net.

If that was a ridiculous way to concede, Lampard's team had the perfect response as they conjured a sublime goal just 121 seconds later. Christian Pulisic's incisive run and pass found Werner and he slipped the ball across to Havertz, who finished from 10 yards out.  But Chelsea's slipshod defending kept Southampton in the game and, in the second minute of stoppage-time, Zouma's weak headed clearance was fired back into the area by Theo Walcott and Vestergaard stooped to head home. 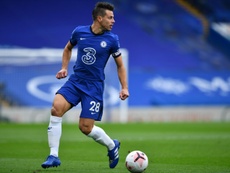 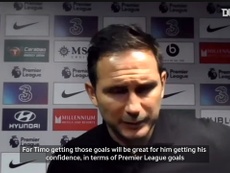 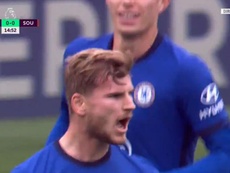 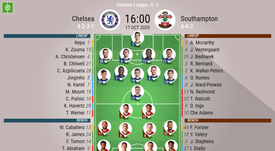