Fourth-placed Leicester also collapsed from leading 1-0 to lose 4-1 at Bournemouth to bring Wolves and Sheffield United back into the mix.

Manchester City did secure their place in the top four with another five-star display at Brighton but now must wait until Monday's verdict of their appeal against a two-season ban from European competitions to see if they can compete in next season's Champions League.

AFP Sports looks at three things we learned from the Premier League weekend.

From start to finish, Chelsea's chastening defeat at Bramall Lane was a sobering lesson for Frank Lampard as the Blues boss surveyed the wreckage of his crumbling defence.

From Mason Mount naively getting caught in possession after dribbling out of his own penalty area to Antonio Rudiger's woefully miscued clearance -- both blunders leading to United goals -- Chelsea gift-wrapped the points for the Blades.

It was the kind of sloppy display that suggests Lampard has much to work on before his side are the finished article. Chelsea have already invested huge sums in reinforcing their attack for next season with the signings of Timo Werner and Hakim Ziyech, but it is at the back investment is most needed in at least one commanding centre-back and a more competent left-back.

Lampard couldn't hide his fury as he complained about hearing only United players shouting and cajoling each other while his own players remained mute as the game slipped away.

Chelsea are now far from certain to qualify for the Champions League, even if City's ban is upheld, with a trip to Liverpool and Wolves visiting Stamford Bridge in the final week of the season.

Another weekend of contrasting fortunes for the England goalkeepers saw Jordan Pickford's erratic performance at Wolves see the calls for Nick Pope to become Gareth Southgate's number one grow.

An inspired display for Pope kept Liverpool at bay as Burnley became the first side to escape Anfield with a point in the Premier League since January 2019 in a 1-1 draw.

"For moments it was Liverpool against Pope," said impressed Liverpool boss Jurgen Klopp.

Pickford on the other hand conceded three in Everton's meek 3-0 defeat at Wolves, the last of which saw the Toffees' 'keeper beaten at his near post by Diogo Jota.

It could have been even worse for Pickford as he recovered just in time to stop the ball crossing the line after letting Daniel Podence's weak shot trickle through his legs.

That was just the latest in a series of calamities from the man who helped England win a penalty shootout at a World Cup for the first time two years ago.

On the field, City have guaranteed a top-four finish for the 10th successive season as Pep Guardiola's men were in stunning form once more to thrash Brighton 5-0.

Raheem Sterling scored a hat-trick as City scored four or more goals for the fourth time in six league games.

A tough road lies ahead if they are to end the club's long wait to win the Champions League for the first time when this season's competition returns in August.

City will restart 2-1 in front against Real Madrid for the second leg of their last 16 tie before Juventus and Barcelona or Bayern Munich could lie in wait in the quarter and semi-finals.

But on this form, Guardiola is confident this could be his side's year.

"I feel the motivation and I think the team is there. I have the feeling that for my players in the club, and the organisation that we have, the next four weeks is something that is not coming back again," said Guardiola.

"I think the big clubs don't miss these chances to try until the last effort they have in their bodies." 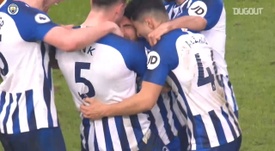