As he prepares to make his debut for Chelsea, Thiago Silva has spoken of how his frightening battle with tuberculosis early in his career is never far from his thoughts.

Thiago Silva signs for Chelsea as a free agent

The veteran Brazil defender joined the Premier League club on a free transfer last month after eight years at Paris Saint-Germain and said he was raring to go.

But he told reporters on his 36th birthday that he often thinks about the illness he suffered in 2005, when he was at Dynamo Moscow.

"It was one of the worst experiences in my life because you have a dream as a child to be playing as a professional footballer," he told reporters on Tuesday.

"And when I got TB it seemed the dream would be over but thank God I had the strength to overcome it and get well."

Silva, expected to make his bow for Frank Lampard's team against Barnsley in the League Cup on Wednesday, said talking about the period brought back painful memories.

"I remember on my last day in the hospital the doctor told me that I hadn't been cured, that I needed an operation on my lungs and that my football career would be over," he said.

"It's difficult. Definitely it's something that not many people have gone through in their lives and a lot of people didn't recover from a similar illness so I think about it a lot, these moments and what I've been through and I had the strength to overcome it."

Silva was asked whether it was a risk to join Chelsea on a one-year deal after the club allowed fellow Brazil veteran Willian to leave, but he said he was relaxed.

"I think when you get to a certain age, the tendency is you sign this type of contract," he said at his first news conference since his transfer.

"I'm totally relaxed about the contract," he added. "Whether Chelsea will want to renew it or not I don't know."

Silva restated his ambition to play at the 2022 World Cup in Qatar, saying he was proud to come to play in the Premier League at the age of 36.

The central defender was asked whether the coronavirus crisis had changed his perspective on the rest of his career.

He said Covid-19 itself did not change things for him during a "specific and unique moment around the world".

But he added: "I'd like to send a message to the young people to tell them to really make the most of their lives -- if someone is playing football, to truly dedicate themselves to football.

"Some people have football as a hobby but it is also a profession, a vocation, a job and life is short. It goes by quickly."

"In 2005, my life could have been over but thank God I overcame that illness and today I can now say I am victorious both professionally and personally and it's a wonderful experience to now be 36 and a player in the Premier League and putting on the Chelsea shirt."

Thiago Silva signs for Chelsea as a free agent 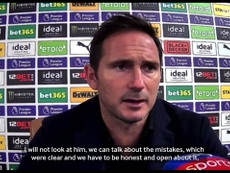 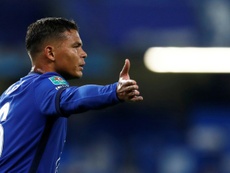 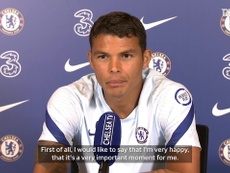 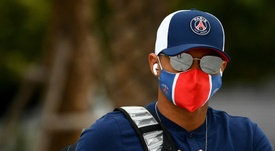