Fred was arguably the man of the match in the Manchester derby, according to his manager Ole Gunnar Solskjaer.

Goals from Marcus Rashford and Anthony Martial set up victory at the Etihad Stadium on Saturday, with Nicolas Otamendi's late reply proving only a consolation for the champions.

A fourth league defeat of the season leaves City 14 points behind runaway leaders Liverpool, while United are a further eight points back despite securing successive wins.

Fred's form has improved in recent weeks after some strong criticism for much of his United career, and he shone against champions City, who had also reportedly been interested in signing him from Shakhtar Donetsk.

The 26-year-old's display was particularly noteworthy given he was part of an unsavoury incident in the second half, in which he was hit by a missile thrown from the crowd and appeared to be subjected to alleged racist abuse.

"[He was] Arguably man of the match today," Solskjaer told reporters of the Brazil international.

"He took the ball, he's playing against Kevin De Bruyne, probably the best player in the league and I thought he was excellent.

"It's great to see it; the boy deserves it. But when you get a run and keep the team together, Scott [McTominay] and Fred have made a great partnership."

The game was overshadowed by those second-half scenes when United had won a corner, with Fred hit after several items were thrown to the pitch, while he and team-mate Jesse Lingard appeared to be targeted by abuse.

City and Greater Manchester Police have confirmed they are working together to investigate the incident, while Solskjaer called for a life ban from football grounds for any individual found guilty of such an offence.

Rashford was among the players to speak out over the incident, with United captain Ashley Young also posting on Twitter: "Should never have to post anything like this because I'd have thought it's obvious but racism has no place in football or society.

"Kudos to Man City for the swift statement, I hope the individual is properly dealt with."

The Fred incident will make the headlines, but Solskjaer was keen to highlight United's first-half display and the importance of holding on for a victory.

"I was so happy with the way we started the game," Solskjaer said. "The way we created big chances, we looked like we could score every time we had the ball.

"And the intent was there to go forward, every time we had the ball. It's not about keeping it or slowing it down; we go for the kill and should have been three or four-nil up.

"But then again, you're playing against the best team in the world, so you have to defend well.

"I think the way we had to prepare for this game, because you follow this team for three years, and they're so hard to defend against because they're so good, I'm very pleased with how they dealt with everything, our boys." 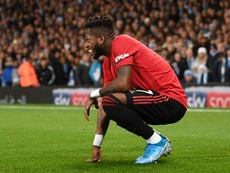 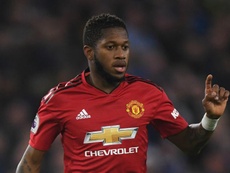 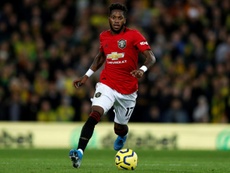 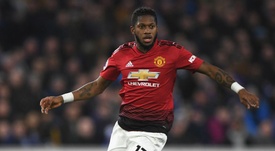 "Fred will remain at Man United"