"This concerns abuse of public office, breach of official secrecy, assisting offenders and incitement to these acts," the authorities said in a statement.

The special prosecutor has been investigating suspected collusion between Infantino and Swiss Attorney General Michael Lauber, who resigned last week over his handling of a corruption investigation targeting world football's governing body. Infantino and Lauber are said to have held a series of secret meetings in 2016 and 2017. The statement said the prosecutor had found "indications of criminal conduct".

Both Lauber and Infantino have denied any wrongdoing. Lauber was in charge of Switzerland's probe into the corruption scandal that exploded at the heart of world football's governing body in 2015.

The scandal erupted when Swiss police in May that year raided a luxury hotel in Zurich before dawn, arresting a number of top football officials. The Swiss judiciary under Lauber quickly opened criminal proceedings against then-FIFA president Sepp Blatter and other top officials. Blatter was eventually removed in 2015 and Infantino took over as FIFA president in 2016. 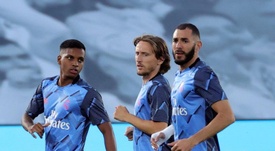