Sevilla and Roma met in Duisburg, a neutral venue, because the first leg in Sevilla on March 12 was called off. It was 33 degrees at kick-off and a drinks break was taken in each half.

The coronavirus pandemic cost each team a player. Roma were deprived of on-loan centre back Chris Smalling, recalled by Manchester United after the Serie A season ended on August 1. Sevilla were without Serbian midfielder Nemanja Gudelj, an ever-present in the competition this season, who is in quarantine after testing positive for COVID-19.

The Spaniards had the advantage of a 17-day break after the end of La Liga. Roma played at Juventus in Serie A on Saturday. The Spaniards dominated and took the lead after 22 minutes. Captain and right back Jesus Navas switched play with a cross-field pass to left back Sergio Reguilon that caught Roma flat-footed.

Reguilon surged past two defenders and into the box before sliding a low shot past Spanish goalkeeper Pau Lopez's foot. Roma did not create a dangerous chance until the 34th minute when Nicolo Zaniolo pounced on a loose ball but fired over. They managed just one shot on target in the match.

Sevilla added a second on the counter-attack in the 43rd minute. Lucas Ocampos burst down the right. After Lopez failed to cut out the low cross, Youssef En Nesyri finished into an empty net from close range. Sevilla, coached by former Spain boss Julen Lopetegui, stretched their unbeaten run to 18 games in all competitions and kept on course to add to their record five Europa League titles.

Lopetegui's men could have extended their lead in the second half when Kounde turned in Munir's cross, but he was in an offside position and then in the 91st minute, Ever Banega hit the crossbar with a powerful free-kick. Sevilla were by the far the better team and fully deserved the win.

Roma finished a frustrating evening with 10 men after Gianluca Mancini was sent off in the 100th minute by VAR for smashing an elbow into the back of Luuk de Jong's neck. It was a tame end to a dramatic day for Roma. The club announced earlier Thursday that it had been bought by US billionaire Dan Friedkin for 591 million euros ($700 million).

Sevilla will return to Duisburg to play either Olympiakos or Wolves, who met later on Thursday. That tie will take place on Tuesday.

In the other 18:55 CET game, Moussa Diaby scored the only goal after 51 minutes to complete a comfortable victory for Bayer, who won 3-1 in Glasgow in March. In the quarter-finals, Bayer will face Inter Milan in Dusseldorf on August 10. 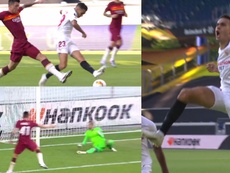 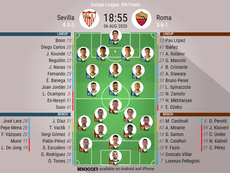 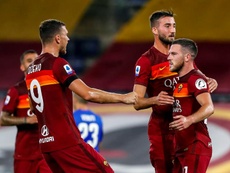 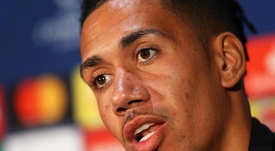 Sevilla looking ahead to Roma game