Although this game was not a classic for the neutral, it is certainly one that will live long in the memory for Saudi Arabian football fans.

The game started out in the scrappy style that would characterise the entire game, with both teams struggling to keep posession in midfield and having making a score of stray passes.

Egypt´s tactic in attack seemed to rely on the pace and dribbling ability of their Liverpool winger, but Salah was caught offside on numerous occasions, struggling to time his runs against a surprisingly high defensive line from the opposition team.

Salah did manage to capitalise on a terrible pass from the Saudi midfield, being assisted from deep in his own half and being able to control the ball and lob Al Mosailem brilliantly to open the scoring on 22 minutes. However, Salah was disappointing in the rest of the game, looking lothargic and as if he was trying too hard to be seen as the best player on the pitch, summarised by an attempt to score another lob just minutes after his goal which missed the goal by some margin.

Saudi Arabia tried to get back in to the game, but often found themselves trying speculative efforts from long range which left their coach Juan Antonio Pizzi kicking a water bottle in frustration. In total, the Saudis had 23 shots of which only 8 were on target, which reveals why their coach was left so frustrated. For the Pharoahs, Trezeguet was their best hope of getting a second, but shot wide after cutting in off the left falnk on two occasions.

The first half came to an extremely dramatic end, with Egyptian full-back Ahmed Fathi conceded a penalty on 41 minutes for a handball offense. The Saudis took the following penalty through forward Al Muwallad, but Egyptian keeper El Hadry brilliantly saved the effort in a game that made him the oldest player to ever play in a World Cup game.

The 45 year-old was less lucky just a few minutes later, however. Al Muwallad was judged to have been brought down illegally in the Egyptian area. After reviewing the decision following the advice of the VAR, on-field official Wilmar Roldan stuck with his original decision and confirmed a penalty in favour of the Saudis, which winger Al Faraj took and calmly slotted the ball home to the keeper´s right.

The second half started much in the same vein as the previous 45 minutes´play, with both teams struggling to dominate the other and balls being sent in to the box without reaching their desired target.

The match looked to be heading for a draw, with both teams struggling in the attacking third. That was until the 95th minute, when Saudi Arabia managed to string a few passes together on the left wing of the oppostion´s goal. The move eventually meant that the ball fell to the feet of Salem Al Dawarsi, who had been one of his team´s better players, who drove the ball low under the diving El Hadry to give Saudi Arabia a dramatic first win in a World Cup match.

The summersault celebration of the Saudi goalscorer was in sharp contrast with the dejection on the faces of the Egyptian players, with winger Warda bursting in to tears on the final whistle as it dawned on him that his team had finished bottom of Group A.

While both teams will head home from Russia, that much being confirmed before kick-off, it will be Saudi Arabia that look back on the tournament with great positivity, despite it gaining only the narrowist of victories.

For Salah and Egypt, it will feel like a missed opportunity to put their nation´s football on the map. With Salah in his prime at the age of 26, will he get another chance to play at a World Cup on top form again? 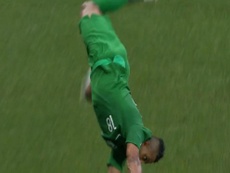 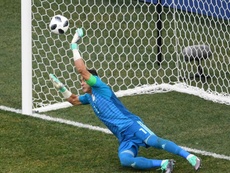 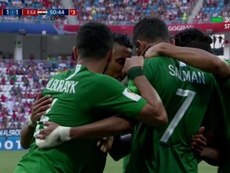 Saudi Arabia scored their first goal of the tournament 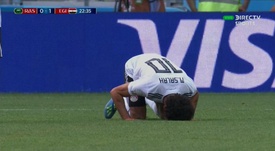 From the sublime to the ridiculous: Salah's mixed bag