Sanchez teed up Ashley Young to volley Inter ahead at San Siro after just five minutes and the Chile forward dispatched a spot-kick to double the lead following a foul on Victor Moses.

Danilo D'Ambrosio powered in a third just before half-time from a looping cross by Young, with Roberto Gagliardini rising to head home a Sanchez free-kick as Inter grabbed a fourth on 53 minutes.

Christian Eriksen bagged his first Serie A goal since his January move from Tottenham, forcing in from point-blank range after an excellent Jesse Joronen save denied Romelu Lukaku.

Antonio Candreva completed the romp two minutes from time with a crisp low drive into the corner as Inter clawed back to within eight points of leaders Juventus with nine games still to play.

"We kept our foot on the gas and the fact that we didn't concede is a big positive," Inter coach Antonio Conte told broadcaster DAZN.

Sanchez, who made just his fourth league start this term, had his loan deal from Manchester United extended earlier in the day until the end of the Italian season.

"We brought him here for his qualities. Unfortunately we lost him as an option for a long time," said Conte.

"He's now starting to find his feet, even if he's still not the Sanchez I was such a big fan of in England. What I can say however, is that he's on the right track, he put in a great performance today."

Brescia, who were again without Mario Balotelli due to an ongoing contract dispute, dropped to the foot of the table. They remain eight points from safety and are winless in 14 games.

SPAL surrendered a two-goal lead and squandered two precious points in their fight against relegation as a 94th-minute own goal by Francesco Vicari gifted Milan a late equaliser in a 2-2 draw.

First-half goals from Mattia Valoti and Sergio Floccari, the second a magnificent dipping 30-yard strike, put SPAL on top but the home side lost Marco D'Alessandro to a red card before half-time for a poor challenge on Theo Hernandez.

Zlatan Ibrahimovic returned to action for the first time since Italian football's restart following a calf injury, replacing the in-form Ante Rebic on the hour, but it was another substitute Rafael Leao who gave Milan hope with a calm finish on 79 minutes.

SPAL coach Luigi Di Biagio was sent to the stands after two yellow cards in quick succession and could only watch in despair as a lunging Vicari diverted a cross into his own net right at the death.

"It was a step backwards in terms of result because we wanted to continue the winning run," Milan coach Stefano Pioli told Sky Sport Italia.

"We weren't sharp enough in front of goal, we were too hurried and hasty in the final third."

Milan stayed seventh despite the late fightback and are two points behind Napoli, who visit fourth-placed Atalanta on Thursday, in the battle for the final Europa League berth.

Two Gaston Ramirez penalties earned Sampdoria a crucial 2-1 win at Lecce, who had equalised through a Marco Mancosu spot-kick, to push Claudio Ranieri's side four points clear of the relegation zone.

Cagliari drew 1-1 away to Bologna as Giovanni Simeone struck early in the second half for the visitors following Musa Barrow's goal in first-half stoppage time.

Juventus maintained their four-point lead at the top on Tuesday after strolling to a 3-1 win at Genoa that kept chasers Lazio at bay despite their 2-1 comeback victory at Torino. 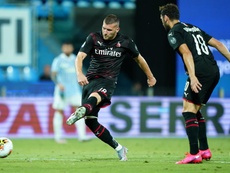 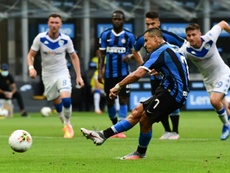 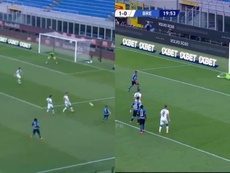 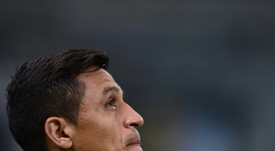 All sporting activity in Italy suspended until April 3