BeSoccer 17 days ago 248
Roko Simic renewed his contract. Salzburg
Salzburg have officially announced that they have reached an agreement with Roko Simic, one of the top talents in European football today, to renew his contract for four seasons, i.e. until June 2024. At just 18 years of age, the Croatian player is one of the most notable of his generation, even in the youth ranks of his national team.

Salzburg have made sure they have a say in the future of one of European football's top players. He is Roko Simic, who has been sandwiched between his performances for the club's U19s and Liefering, their reserve team, with a run of five consecutive games on the scoresheet - eight goals to his name to fuel his form.

The club formalised through its official channels the renewal of his contract for five years, i.e. until June 2025. This step is essential so that, if he continues to progress, the board can negotiate in the event that prestigious suitors come in with the aim of adding him to their ranks.

If this does not happen, extending his contract is still the right move because it ties the striker's future performances to the club for the long term. The next steps are clear. He has to develop further until he breaks into the Austrian Bundesliga, where the fans are eagerly waiting for him to become one of the 'entertainers' of the championship.

"Now I feel very comfortable here in Salzburg and have adapted well. But the most important thing is that I get on well with the group and I'm well adapted to the football here, even though I know I have more to give. That's why I'm very happy that my contract has been renewed, it gives me confidence and security," Simic told the Salzburg media outlet.

Man Utd throw in the towel: Pogba to leave in summer for free »
Related articles Adeyemi will be highly sought after in the winter market 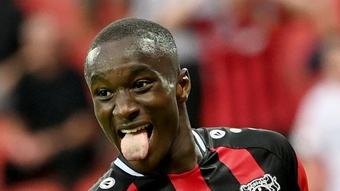