Salah comes back to haunt former side as Liverpool thump Roma

A simply breathtaking display from Liverpool star Mohamed Salah helped the 'Reds' claim a 5-2 victory over Roma in their Champions League semi-final clash on Tuesday night as Liverpool put themselves in a commanding position ahead of the second leg at the Stadio Olimpico, though a late Roma surge means that the Italians still hold a glimmer of hope.

"I can assure you we didn't prepare the match based on Salah," said Roma boss Euusebio Di Francesco before the game, a phrase that he is probably now regretting after the Egyptian scored twice and assisted two more in a stunning individual display at Anfield.

If there was any doubt as to the threat that Liverpool posed then the Italians were given a warning with just five minutes gone as Roberto Firmino fired across the face of goal after being fed by Salah.

The hosts suffered a major blow on 15 minutes as Alex Oxlade-Chamberlain was forced off on a stretcher after a challenge with Aleksandar Kolarov, with his World Cup participation now in doubt.

Kolarov was at the centre of things just minutes later as he thumped an effort from 25 yards through the hands of Karius and onto the bar after Virgil Van Dijk's cheaded clearance landed in his path.

As the first period went on, Liverpool gradually took control and they looked dangerous every time they went forward.

Sadio Mane really ought to have done better than blazing over with just Alisson to beat after being set clear by Firmino, whilst he repeated the trick just 60 seconds later, screwing an effort horribly off target after the Brazilian's cutback from the right.

When the Senegalese did have the ball in the net after 33 minutes it was all in vain as he was adjudged to been offside when Andy Robertson crossed low from the right.

Cue Mo Salah. Facing his former side, there had been suggestions that he would fail to replicate his spectacular recent form, but those fears were proved unfounded as he curled a spectacular opener beyond Alisson and into the far corner, with a kiss off the underside of the crossbar for good measure.

Just two minute later it could have been two as Dejan Lovren headed against the bar after being left competely unmarked from a corner, but with the half in its dying embers, Liverpool did get a second, with Salah at it again.

The forward guided a clearance around the corner for Firmino who set him away behind and he kept his cool to dink the ball over the onrushing Alisson and send Liverpool in 2-0 up at the break, making Liverpool history in the process.

Having tasted blood, Liverpool continued in the same vein in the second half and soon had a third, this time Slah turning provider as he was found all alone down the right by Milner, before crossing low for Mane to slide the ball home and make amends for his earlier misses.

Liverpool looked a constant threat and a fourth and fifth soon followed. First, Salah was able to isolate his man far too easily down the right, leaving Juan Jesus for dead before putting it on a plate for Firmino to tuck home from close range.

Firmino then doubled his tally for the day, heading home James Milner's corner form the right.

Had the whilstle gone at that point it could have been considered the perfect performance from the hosts but a late fightback from Roma took some of the shine off the victory.

First, an error from Dejan Lovren allowed Edin Dzeko to gather Radja Nainggolan's pass on his chest before slotting past Loris Karius at the near post to get Roma on the scoresheet with less than ten minutes to go.

Just minutes later, the visitors won a penalty as Nainggolan's volley was blocked by the arm of Milner, with substitute Diego Perotti doing the honours frmo the spot to make it 5-2 on the night.

Whilst Liverpool certainly have the upper hand, the concession of two away goals at such a late stage of the game will no doubt leave Jurgen Klopp furious. 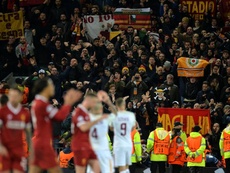 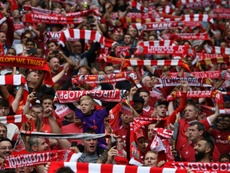 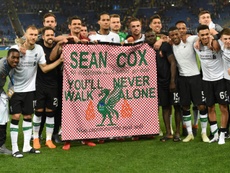 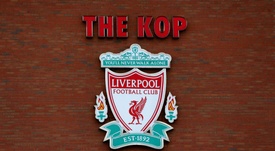 Liverpool and Roma charged by UEFA

Doctors aim to bring Liverpool fan out of coma