Roma will not rush Schick recovery

With Patrik Schick yet to start a game for Roma due to injury, Eusebio di Francesco is determined not to rush the forward back.

Eusebio di Francesco refused to discuss Patrik Schick's progress ahead of facing Napoli on Saturday as he does not want to put pressure on the Roma forward.

Schick was signed from Sampdoria in the recent transfer window, with many seeing the Czech Republic international as a replacement for Mohamed Salah on the right-hand side - despite their differing skillsets.

But the 21-year-old has seen only 15 minutes of competitive action for his new club due to a hamstring injury and he will again be missing for the visit of Serie A leaders Napoli.

Confirming that both the youngster and Kevin Strootman would be absent at a pre-match news conference, Di Francesco offered a spiky response to queries about Schick's fitness, saying, "Enough questions about Schick, there isn't enough time.

Di Francesco: "Strootman and Schick will not be available. For his own good, I'll only select Patrik when he's ready."
#RomaNapoli #DiFra

"It puts pressure on the lad, who wants to return quickly. I'll put him on the pitch as soon as he's able to play; not to make others happy, but just for his own good."

Roma are six points behind Napoli - albeit with a game in hand - but Di Francesco is confident of a positive result should his team defend as he expects them to.

"The team that loses will only lose a little psychologically, because there are still a lot of games to play," he said. "The result is important, but it's the performance that is vital.

"The team that is able to do better defensively will secure an important result. In that regard, we have to do better than Napoli - as a team, not just the four defenders." 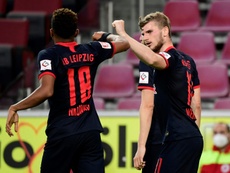