French champions Paris Saint-Germain blew a chance to provisionally move top of Ligue 1 on Saturday as they crashed to a shock 3-0 defeat at Montpellier.

Paul Lasne struck just before half-time for Montpellier, the last team other than PSG to lift the French title back in 2011-12, with Ellyes Skhiri adding a second shortly after the break.

Ryad Boudebouz capped a remarkable afternoon at the Stade de la Mosson with a terrific individual goal 10 minutes from time as Unai Emery's PSG remained a point behind leaders Nice.

"Montpellier were very efficient with the chances they had, while we were not," PSG defender Marquinhos told 'Canal+ Sport'.

"It was a difficult match, Montpellier were good as a unit in defence. After they scored the first goal, it was very difficult.

"We can't commit the same errors in our upcoming games if we want to be champions. We have to get back to work straight away".

The reigning champions could lose further ground with Nice hosting Toulouse on Sunday, while Monaco will climb back above PSG if they beat Bastia at home later.

PSG face Ludogorets of Bulgaria in the Champions League on Tuesday as they try to seal top spot in Group A before taking on Nice next weekend, but they were blindsided by a Montpellier outfit that had won just three times in 15 matches this season.

The visitors were without midfield trio Marco Verratti, Adrien Rabiot and Thiago Motta as 19-year-old Christopher Nkunku was drafted in by Emery for his first league appearance this term.

The teenager should have put PSG in front from Angel Di Maria's left-wing cross with just six minutes gone, but his close-range header was turned away well by Laurent Pionnier.

Montpellier, whose last win over PSG in the league came in May 2010, grabbed the lead three minutes before the interval as Lasne latched onto a long ball out of defence and lobbed an advancing Alphonse Areola.

Skhiri doubled Montpellier's advantage three minutes into the second half as Morgan Sanson chased down a loose ball before laying it back to edge of the area for the former to curl home superbly.

A mix-up between Vitorino Hilton and Daniel Congre presented Di Maria with a chance to halve the deficit, but the Argentine fired straight at Pionnier on 53 minutes.

The Montpellier keeper then blocked with his legs to deny Lucas with Blaise Matuidi subsequently blazing over from Layvin Kurzawa's cutback.

Algeria international Boudebouz extinguished any prospect of a late PSG revival as he ran from inside his own half before arrowing a low strike beyond Areola for Montpellier's third. 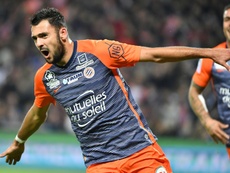 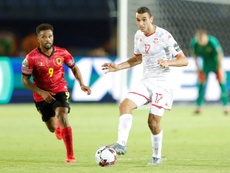 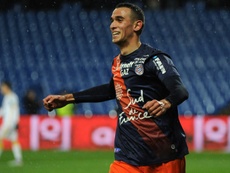 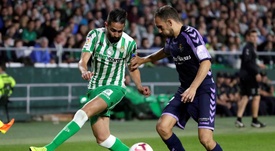