Paul Singh 18 days ago 28.5k
Harry Kane has now scored 17 goals, the same as Mo Salah. AFP
With most of the teams in the Premier League having playing 28 games, Kane is now on the same number of goals as Salah.

After 29 games, Kane is now the top scorer in the Premier League on the same number of goals as Salah. Kane scored a penalty in Tottenham's 0-2 win at Aston Villa while Liverpool were not in action at the weekend. The Englishman has got 13 assists so far this season while Salah has just three.

Bruno Fernandes is second on 16 goals. United did not play in the Premier League as they were involved in FA Cup action.

Calvert-Lewin is still third on 14 goals, but he is now joined by Leeds' Patrick Bamford. The Englishman got a goal in Leeds' 1-2 win at Fulham on Friday, but he has been overlooked for the England squad by Gareth Southgate.

Son remains on 13 goals after not scoring in Tottenham's win at Villa.

Vardy and Gundogan both remain on 12 as Leicester and Man City were involved in FA Cup action.

Who will win the Golden Boot? 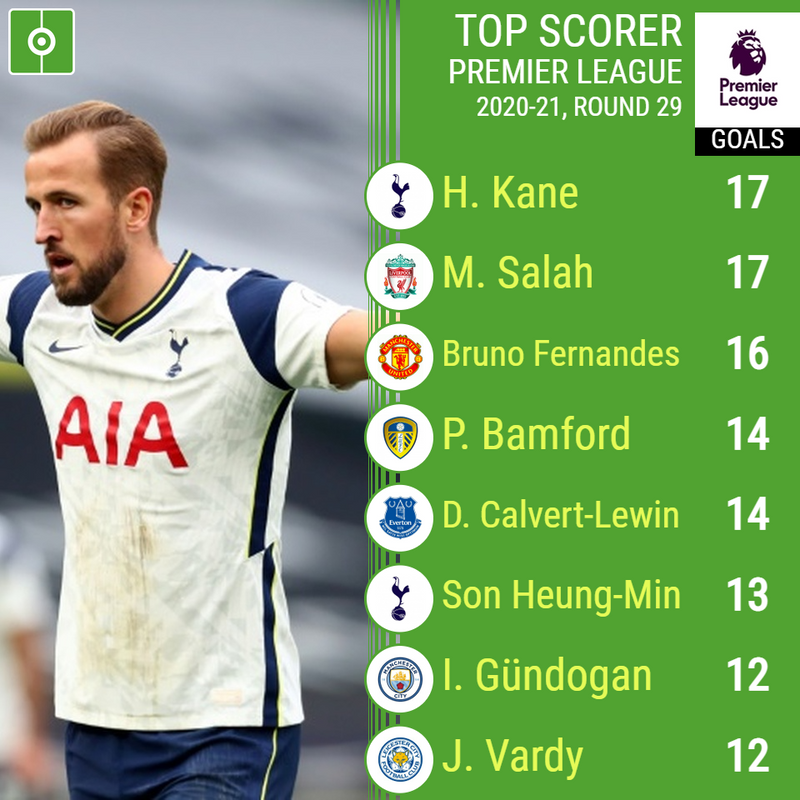 Mentioned in the news story
Everton

Man Utd battle back to take revenge on Tottenham

Food fight: Mourinho hits back at Solskjaer over Son criticism

Liverpool move up to fourth after late winner

What we learned from Real Madrid v Liverpool