Mauricio Pochettino insists he will "adapt" to the loss of Tottenham's World Cup absentees, despite the impact on the club's preparations for the new Premier League campaign.

Spurs thrashed Roma 4-1 in their opening game in the International Champions Cup pre-season tournament on Wednesday after doubles from Fernando Llorente and Lucas Moura earned Pochettino's side a comfortable win in San Diego.

But while World Cup trio Christian Eriksen, Son Heung-Min and Davinson Sanchez all played a part, there were a host of big names missing from Spurs' ranks, including Harry Kane, Hugo Lloris and Dele Alli after they have been given extra time off for their exploits in Russia.

Spurs had nine players represented among the four World Cup semi-finalists, but while that group may struggle to feature in their Premier League opener at Newcastle on August 11, boss Pochettino is focusing on those who are definitely available.

"It's different circumstances [this summer] because the [World Cup] players need to rest and a period to recover after more than 12 months of competition," said Pochettino.

"I'm not complaining about that. I completely understand that they need 21 days away from football.

"Of course, it's a massive disadvantage because to prepare the season in that way will be tough for them. But I need to adapt.

"We cannot delete the start of the season. It starts earlier than other leagues and other countries. We are going to be all in a similar condition. Some teams have more problems than others."

Spurs' makeshift defence was brutally exposed inside the opening three minutes. Luca Pellegrini and Javier Pastore were allowed to interchange on the left-hand side of the box and the ball was bumbled to Patrik Schick, with his back to goal 12 yards out.

Despite the close attention of three white shirts, Schick was able to turn and divert a low shot beyond Michel Vorm into the far bottom corner.

But parity was restored five minutes later after good work from Moura and youngster Ben Amos in forcing Pastore to surrender possession just outside his own area. The deflection on Amos' right wing cross took all the pace off the ball, but Llorente was able to generate sufficient power himself to direct a header beyond keeper Antonio Mirante.

Eriksen's elegant angled right foot shot from 20 yards almost put Spurs ahead moments later, but his effort crashed back off the far post.

Pochettino's side remained in the ascendancy though and went ahead through Llorente's 18th minute second. Erik Lamela's inswinging left wing cross drifted beyond the Roma back line to an unmarked Moura at the far post.

His volley was pushed away by Mirante, but only into the the path of Llorente, who diverted the ball into the empty net.

Roma's inability to deal with crosses was exposed for a third time just before the half-hour after Serge Aurier whipped in an inviting ball from the right and Moura got ahead of his marker to head home.

Moura added a second a minute before the interval after showing excellent composure on the edge of the box. Sissoko's cross had been pushed away by Mirante and then Konstantinos Manolas' challenge, but Moura picked up the loose ball, skipped past a challenge and then fired a low shot into the bottom corner.

Roma manager Eusebio Di Francesco said: "We had a good start to the game, although I didn't like how we defended in the second part of the first half, we were not compact enough or organised enough on the pitch." 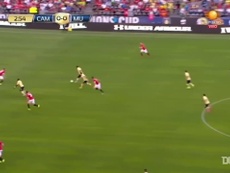 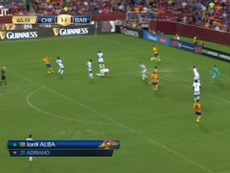 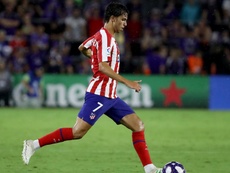 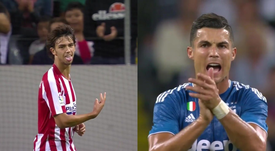 Diego Costa will miss the match against Juve