Arsenal claimed all three points in an absolutely thrilling game against Vitoria Guimaraes in the Europa League. The game ended 3-2, but Arsenal did not have it all their own way at all. In fact, it looked for a long time like they would come away empty handed.

Emery's men had some early possession, but Guimaraes, who needed to win this one, had the first chance after four minutes. Davidson won the ball and combined with Garcia before Almeida turned inside the box before hitting a tame effort at Martinez. Four minutes later, Guimaraes took the lead. Guimaraes flicked the ball on at midfield and Garcia ran down the far flank before crossing to Edwards who dummied before hitting home.

Arsenal responded with a shot wide in the 11th minute and Guimaraes looked more up for the fight. Arsenal were sloppy in defence and the Portuguese outfit were looking dangerous. Holding had to cut out Hanin's cross in the 24rd minute after good play from Davidson. However, Arsenal went up the other end and were centimetres away from getting on the end of Bellerin's cross before he headed home Tierney's ball in four minutes later to restore parity.

There was palpable relief at the Emirates and Smith-Rowe nearly made it 2-1 seconds later, but his shot was deflected past the post. The see-saw match continued and eight minutes before the break, Guimaraes went back in front. Maitland-Niles lost the ball in his own half, Davidson was clean through on goal and hit the post with his strike, but Bruno Duarte was there to smash home the rebound. Arsenal had to fight back once again. Martinelli hit wide shortly afterwards before the half ended with Edwards almost making it 1-3.

After the interval, Arsenal brought on Guendouzi and Ceballos and there was a flood of chances. Mustafi headed a corner wide before Poha was denied by Arsenal GK Martinez after a lovely shot with his heel. Smith-Rowe then inexplicably missed the target for the hosts after Ceballos and Tierney combined. Then, there was a flashpoint in the 57th minute when Garcia put his head to Lacazette's, something which earned him a yellow card.

After that flurry of chances, the game calmed down and Guimaraes were comfortable. Holding had to deflect a Davidson shot for a corner just after the hour mark. Arsenal were trying, but could not do anything except a curling Lacazette effort 17 minutes from time. Then with 15 minutes left, everything changed when Pepe came on for Lacazette.

With 10 minutes left, Nicolas Pepe hit a free-kick around the wall and into the goal to make it 2-2 The keeper should maybe have been more to his right, but it was a great goal. A frenetic end to the game followed. Guimaraes went straight up the other end and Davidson hit just wide. Silva then made a super save to deny Martinelli after a Bellerin pass and then Mustafi headed over the crossbar all in just three minutes.

Pepe then got another free kick in the 85th minute which Holding headed goalwards, but Silva dived to his left to save. Guimaraes were hanging on for dear life and right on the stroke of full-time, they were undone by another splendid free-kick. The Frenchman hit it over the wall and into the top corner after Guendouzi fouled Rochinha. The keeper could do nothing and Guimaraes' hearts were broken.

The away side are now all but eliminated with no points from three games while Arsenal are all but through to the last 32 of the competition with nine points from three matches. There is no doubt though that Guimaraes deserved something from the game and that Arsenal got out of jail after a dreadful start. The two sides will do battle once again on November 6th in Portugal. 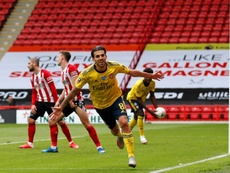 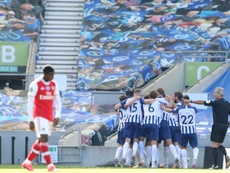 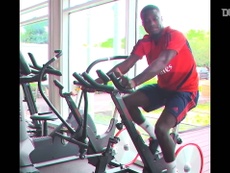 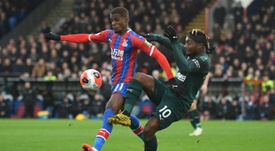 Emery and Zaha reached a deal to sign for Arsenal, but the club opted for Pépé

The possible need to sell 6 players to pay for one